Manuel, more commonly known as "Manny" Calavera is the main protagonist in the 1998 Lucasarts adventure-game Grim Fandango. He is voiced by Tony Plana.

At some point, through unknown circumstances, Manny died and entered the land of the dead, a large realm which people have to travel through to enter the land of eternal rest where they can finally rest in peace. However, traversing through the land of the dead will take at least four years if you travel by foot. Fortunately, there's a company called the department of death that assigns people certain methods of transportation based around how virtuous they've been during their lifes. People that has been very kind are given double N tickets to the number nine luxury express train which takes you to the land of eternal rest in four minutes instead of four years. Those that have lived very sinful lives are forced to walk. Manny couldn't afford a double N ticket and thus got himself a job as a travel agent at the department of death so that he could eventually earn himself one.

However, Manny are for some reason always assigned clients that has to walk the four-year journey, making it nearly impossible for him to earn a ticket of his own. One day, with the help of a friendly demon named Glottis, he steals a client from his colleague Domino Hurley. The client's name is Mercedes "Meche" Colomar and has lived as a saint her entire life. Yet for some reason Manny's computer can't assign her a double N ticket. After Meche leaves to walk the four-year journey, Manny finds out from a revolutionary named Salvador "Sal" Limones that his co-worker Domino had rigged the computer so that no one would be able to get a ticket. Domino had, along with a gangster named Hector Lemans, stolen the tickets to sell them for outrageous prices. Manny realizes that he cant stop Domino and Hector for the time being, and decides to pursue Meche instead to tell her the truth. Once again, he is accompanied by Glottis.

They eventually arrive at the port-town of Rubacawa, and open up their own casino while they wait for Meche to appear. After one year, Manny see’s her leave the port onboard of a ship, and so he and Glottis pursue her.

They discover a coral mining plant where Meche, along with several others who had their double N tickets stolen, are forced to work as slaves for Domino Hurley. But Manny eventually finds a way to help everyone escape from the slave camp. Domino tries to stop them, but gets killed in the process.

After a long journey, they arrive at the passageway to the land of eternal rest, but are not allowed to enter since they don’t have any tickets. Manny returns to the city of El Marrow where he succeeds in tracking down Hector Lemans, killing him and taking the tickets back. He travels back to the passageway and gives the tickets to their rightful owners. In return, he is also granted access to the land of eternal rest for his good deeds. Glottis, being a demon, sadly cannot accompany them, but shares a friendly hug with Manny before the departure. Meche, now being in a relationship with Manny, wonders if they will still be together once they enter the next world. Manny responds that there is no way of knowing that for certain, so they might as well enjoy the trip.

Manny is a very skilled, resourceful and somewhat manipulative salesman, saying and doing whatever it takes to further his own interests. His selfish and unapologetic nature often leaves the people who know him very resentful. However, Manny doesn't appear to care much for other people's opinion of him, often teasing, insulting, lying and even stealing from his "friends". He only works at the Department of Death so that he one day can earn his own double-N ticket and move on to the next world.

But when he one day seemingly makes a mistake and causes a client named Mercedes Colomar to think she doesn't deserve a double-N ticket he is filled with remorse and sets out to find her, facing countless dangers and obstacles just to repent for his mistake. His new noble pursuit causes him to develop a slight hero-complex, wanting to save as many people on his journey as he can, even if it seems impossible. His devotion to Mercedes eventually leads to the two of them becoming romantically involved.

Unlike many high-society skeletons, Manny doesn't believe demons are lower life-forms, as evidenced by his close relationship with his friend Glottis. Manny treats Glottis like an equal(most of the time) and Glottis in return is fiercely loyal to him. 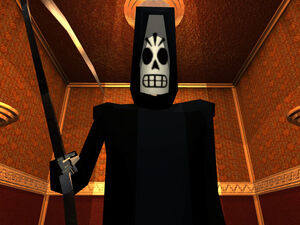 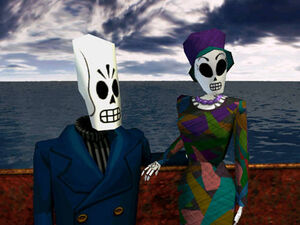 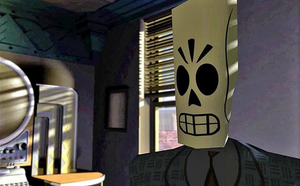 Add a photo to this gallery
Retrieved from "https://hero.fandom.com/wiki/Manuel_Calavera?oldid=1588658"
Community content is available under CC-BY-SA unless otherwise noted.