Educate the Human society to help improve their civilization.

Maou The main female protagonist and the supreme ruler of the Demon Realm. Soon after Demon Queen and the Hero join forces, she sets for the Human Realm, disguising herself as a human noblewoman known as the Crimson Scholar, and sharing a part of her vast knowledge with the Human society to help improve their civilization.

Becoming famous in the Human World not only by her feats, but also by her beauty, the Crimson Scholar is viewed with distrust by the church who brands her as a heretic in spite of her growing influence, fearing it would loosen its grasp over the countries and helped by her. To ensure a temporary ceasefire between the Humans and Demons, the Demon Queen disseminates rumors that her battle with the Hero indeed occurred, resulting in his disappearance and her body becoming severely wounded, thus leading her servants to the false belief that she would not be able to command them until her recuperation is completed.

The Demon King is a woman of average height. She has (detachable) horns and long, flowing red hair reaching some way down past her shoulders.Similar to her hair, she has deep, ruby colored eyes. Even though she looks young, she is in fact over a hundred years old.

She wears a long, red robe that reaches down to her feet, the robe has an open front, revealing her ample cleavage. This robe has a feathery collar, similar to a boa; and a red diamond pattern running along it's black sleeves. The front of the dress features a large orange stripe framed by smaller black stripes and she has a small bow on the front of her dress below her breasts.

The Demon King is generally easy-going and very cheerful and relaxed. So much so, she greeted the Hero who'd come to kill her, with a simple "Hello!"; stopping him mid-swing and startling him.

She also seems to have less modesty than most, as she had no problem nearly fully exposing her breasts to the hero to show him her "Demon Mark" to prove that she is the "Demon King". Though an imposing and intelligent woman, she has shown a bit of a childish and comedic side.

The Demon King is seen pondering, completely oblivious of the Hero charging towards her, intending to kill her. Even with the Hero charging towards her, she remained perfectly calm, and simply turns around; greeting him with a simple "Hello there", startling the Hero mid-swing. After she shows the Hero her "Demon Mark" as proof of being who she is. She explains to the Hero that because of this war, the people in faraway nations, who are helping the war effort, are only able to have their luxuries because of the war.  In her room, she gives the Hero the Demon Lamp to hold, and after she explains what is really going on in his memory, they return to her room, where she also shows him where she would like to see. After this, she one again tells him that he will be hers, to which he replies that she is his. She accidentally touches the Demon Lamp again, where a memory of her hugging a bag with the Hero painted on it. After the memory dismisses, she tells the Hero to forget what he has seen. She then shocks the Hero again by taking her horns off, before they leave to go to the hill.

Little is known of her abilities but she is able to plan a strategy upon knowledge and has insights about the future. 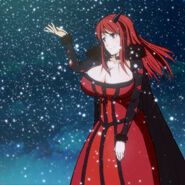 Maou without her horn headband 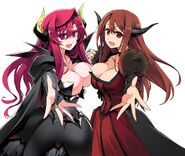 Retrieved from "https://hero.fandom.com/wiki/Maou?oldid=1873631"
Community content is available under CC-BY-SA unless otherwise noted.