Mappy is the Protagonist of the video game Mappy. He is a police officer mouse retrieving stolen items from a mansion while avoiding coming into contact with his enemies Meowky, Goro, and Goro Coin as well as breaking through trampolines.

Mappy makes his other appearance in his web series, titled Mappy: The Beat. He is working a thankless job as a security guard for his former foe Goro's company Nyamco. He is accompanied by his friends and fellow Nyamco employees, the laid-back digging-obsessed Dig Dug and the dim but good-natured Sky Kid, along with other Bandai Namco characters working at the office. 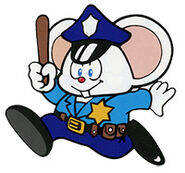 Add a photo to this gallery
Retrieved from "https://hero.fandom.com/wiki/Mappy?oldid=1768164"
Community content is available under CC-BY-SA unless otherwise noted.