Goddess of Love, Marriage, and Compassion

Helping in the love affairs of mortals.

Mara is the mother-goddess, the goddess of love, marriage, and compassion, and one of the Nine Divines in the Elder Scrolls series. According to beliefs, she is supposedly the wife of Akatosh or Lorkhan (or possibly both). Many of Tamriel's worshippers encompass her to the process of marriage.

Although she is not worshipped by everyone in Tamriel, Mara's beliefs hold that her many worshippers "Live and preserve in Peace, respect their elders, and take responsibility in the role of your family". In saying this, many pantheons consider her as one of their many deities. Her primary chapel/temple is located in the city of Bravil in Cyrodiil, however there is another temple in Skyrim that's devoted to her, here, the priests carry out marriages in her name and honor, as well as selling the Amulet of Mara, which is used as a symbol that the wearer is looking for a spouse. They also accept charities as a means of generosity.

She also plays a major role in The Elder Scrolls V: Skyrim. The Dovahkiin can interact with the priestess Dinya Balu, wife of the head priest of the temple, and from here, she can grant them the blessing of Mara through quests dealing with love affairs throughout Skyrim. She is also honored and bestowed upon during the Dragonborn's wedding. 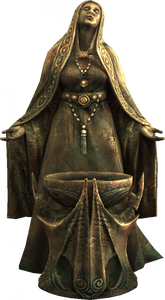