Attendant to the God of Destruction of Universe 11

Assist Belmod in any way.

Marcarita is a minor supporting antagonist in the 2015 martial arts fantasy manga series Dragon Ball Super and its 2015-2018 anime television series adaptation of the same name.

She was an Angel who served as the Attendant to Lord Belmod, the God of Destruction of Universe 11. One of the twelve known children of the Grand Minister, she was the most powerful being that resided within Universe 11. Like all Angels, Marcarita had an emotional detachment from her God of Destruction and the universe she lived in due to her status as a Guide sent from the great beyond.

Marcarita is voiced by Ai Sasaki in Japanese and by Jamie Marchi in English. Marchi has also voiced Rias Gremory in High School DxD, Mount Lady in My Hero Academia, Ristarte in Cautious Hero: The Hero Is Overpowered but Overly Cautious, and Mitsuko Kongou in A Certain Scientific Railgun.

Marcarita was an Angel born and raised in the Angel Realm whose father was the Grand Minister, the personnal vizier to the supreme ruler of the Multiverse Grand Zeno. She was given the responsibility of guiding the God of Destruction of Universe 11, and as a result became the Guide Angel to the Destroyer Lord Belmod. At some point she began training a mortal named Top as a candidate to eventually replace Belmod as the God of Destruction.

In Age 780, Marcarita stood in wait behind her Destroyer on Belmod's planet as he was pampered by female inhabitants of a world he intended to destroy who sought to appease Lord Belmod. She received a summons from her father the Grand Minister, who requested the presence of Belmod at the Omni-King's palace. When Marcarita tried to inform Belmod of the summons, one of the women doting on him threatened her with a knife for interrupting.

Belmod used his power to destroy the woman, after which the pair rendevzoused with Top and Khai, the Supreme Kai of Universe 11, and teleported to Zeno's palace. The Gods of Destruction, the Angels, and the Supreme Kais of all twelve universes had been gathered in Zeno's throne room for an important announcement. Firstly however, everyone present was introduced to Future Zeno, a version of the Omni-King from an alternate future timeline who would henceforth rule dually with the regular Zeno.

The Grand Minister announced that a fighting tournament called the Tournament of Power would be held between the eight universes with the lowest mortal levels. The tournament would be a battle royale consisting of ten mortals from each of the selected universes, which included Universe 11. Fighters would be eliminated by ringout, and killing was strictly prohibited. Additionally, any universe that had all of its fighters eliminated would be erased by the Omni-Kings.

However, as the Future Zeno had never seen a martial arts tournament before, the Grand Minister teleported everyone to a fighting arena and instructed the Gods of Destruction to fight one another as a demonstration. The following battle between every God of Destruction was too chaotic and destructive for the Omni-Kings to follow, and as such they were displeased. A follow up fight between Top and a mortal from Universe 7 named Son Goku commenced shortly thereafter, which pleased the Omni-Kings.

After the briefing, Marcarita warped herself, Khai, Belmod, and Top back to Belmod's planet. The four of them began to formulate a plan, and also spoke of the Tournament of Power's prize: the Super Dragon Balls, a set of wish orbs that could grant any wish. Belmod sent Top to recruit members of the Pride Troopers, a group of peace protectors that patrolled Universe 11. 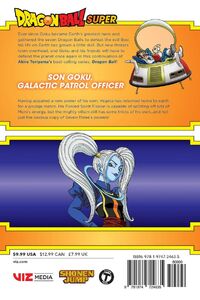