Hanging out with Star

Marco Ubaldo Díaz is the deuteragonist of Star vs. the Forces of Evil. A Latino-American boy who live in California, he has been assigned the task of helping Star Butterfly adjust to Earth, and of providing Star with a home thereon. He has also come to serve the additional roles of aiding Star in fighting all matter of inter-dimensional monsters, and has become her best friend and closest ally.

In the first episode, Marco was chosen by the principal to guide and show Star around the school due to his reputation. As he discovered upon returning home on the same day (after having discovered Star's bizarre background at the end of the tour he had given her), his home had also been selected to be Star's home, though the person or persons who made this decision and the means by which it was reached remain as-yet unknown.

Immediately following his interactions with Star, Marco ran away from home, abhorrent of his new roommate. Star managed to find him afterwards, and acknowledged the hardship she had put him through. Prior to closure being fully reached, the two were ambushed by the villain Ludo and his thugs. After having helped to ward off the assassination attempt, Marco expressed a change of heart toward Star, and a preference for her to remain a resident of his home. The two headed back to Marco's house following this reconciliation.

In the most recent season, the roles have been rather reversed, with Marco deciding to stay in Mewni with Star for a while. Star appointed him to be her personal Royal Squire, so he could always be there to advise and protect her.

Marco is practically the exact opposite of Star. He is very wary and tries to avoid any trouble or exposure. Because of Marco's cautiousness (and the one time he wore a helmet in the gym shower), he is labeled by both his peers and school staff as the "safe kid." Ironically, despite his predilection toward practical caution, Marco seems to enjoy the prospect of combat and adventure (In the first episode, he even expressed a desire for "some action and danger in (his) life"). Marco also seems to want this to be opined so with his reputation, as well; Marco openly expresses disdain for being considered a "Safe Kid", and has repeatedly attempted (to little avail) to persuade others to view him as otherwise.

Marco has proven to be notably irritable, as seen in his rambling about his reputation in the pilot episode, and his very quickly losing patience with Star in the same episode. He has also demonstrated poor sportsmanship, elevating himself and slandering his opponents in the Arcade Dimension of the episode immediately following, though this may have simply been on account of his anger and defensiveness against Pony Head, due to her mistreatment and threats against him.

Marco seems to have studied martial arts extensively, namely Karate, as seen in the pilot episode, in which he employs it to combat the monsters who come to assassinate Star (even explaining it as such to her). He can also briefly be seen in the introductory animated sequence about to break a wooden board, a common test of strength and technique in East-Asian martial arts. 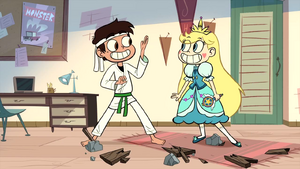 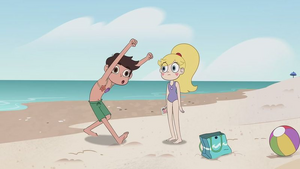 Retrieved from "https://hero.fandom.com/wiki/Marco_Diaz?oldid=2313202"
Community content is available under CC-BY-SA unless otherwise noted.