Join DedSec to take down Blume and CTOS 2.0

Marcus Holloway is the main protagonist of Watch_Dogs 2 and is also a playable character. He can be considered as a villain when he commit crimes (such as murder, robbing or carjacking).

Marcus Holloway was born in 1992 at Los Angeles, California. Later, he moved to San Francisco with his family at some of young age.Marcus was at one point placed into a community program where he would discover an affinity for computers. In 2012, rising crime rates would lead to the institution of the Home Domain Center,surveillance initiative, and in 2013, Marcus was falsely accused of being the primary suspect in a high tech robbery. With the only evidence being the HDC predictive software, he only got community service as punishment. But because of the accusation, Marcus was frequently discriminated against. This disillusioned him to the system that put him in these circumstances, and under the alias "Retr0", hacked local government officials and leak incriminating documents on HDC data gathering. Turning his attention the rise of CTOS 2.0, Marcus started hanging around DedSec IRCs and searching for CTOS weaknesses on Nudle search.

In some years before the event of Watch Dogs 2, he joins DedSec in San Francisco order to take down Blume and Ctos 2.0.

Marcus typically wears a black sweater under a dark blue jacket, with dark pants and light boots, as well as a small shoulder bag for his gear. He covers his face with a "DeDSec" hat, bandana, and shades, and under them has a soul patch and light mustache. His clothes are able to be customised by the player.

Despite being hero, there is still few villains actions that he can commit during free roam. However, he never commits any of his villain actions during storyline. 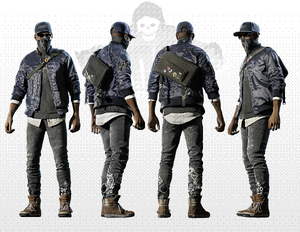 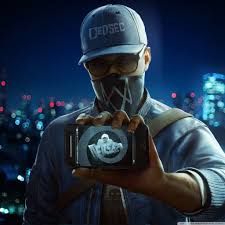 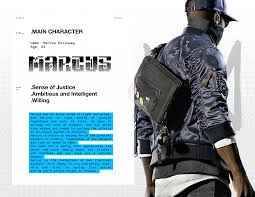 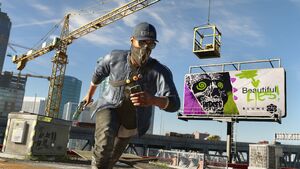 Retrieved from "https://hero.fandom.com/wiki/Marcus_Holloway?oldid=1749894"
Community content is available under CC-BY-SA unless otherwise noted.