Uncover the secrets of her book Secondary, Recover her memory

Margaret Burton is the deuteragonist of the anime series Madlax. She is a 19-year-old college student and a member of one of the richest families in Nafrece. She has no memory of the first seven years of her life, having mysteriously lost her memory twelve years ago. The only things she remembers are the word "Madlax", and vague recollections of something important connected to an unusual "picture book" she possesses. She is the daughter of the deceased Richard Burton, the original possessor of the "Madlax" codename.

She is voiced by Hōko Kuwashima in the Japanese version and Luci Christian in the English version, both of whom also voice Medusa Gorgon.

Margaret is a rather short young woman with dark brown hair that she keeps in braids and brown eyes. She is usually seen wearing her school uniform, which consists of a white shirt, pink coat, red tie and black skirt. In bed, she wears a pink nightdress with a green collar.

Margaret is generally a spacey and absent-minded girl. She doesn't seem to be a morning person as she easily falls asleep during her morning activities and, at one point, ends up walking in the wrong direction towards her school. She is a rather strange girl who displays a lot of odd behavior; she describes news about a terrorist attack as "boring", claims it's going to rain when there's no signs of it, stares at red shoes for ages through a window despite not wanting them (which results in her being late) and takes being on a person's mind as a sign she did something to offend them. When she first lost her memories, however, she wasn't able to so much as speak, and was only able to return to a normal, functioning life with Vanessa's help.

Margaret is a kind person who's very faithful to the people she cares about. She cares a great deal for Elenore and Vanessa, even describing her feelings towards the former as "love". She tells Eric Gillian that he should stick to his job as a book detective if he has a talent for it, saying that it's nice to have a talent, and has faith that he can help her decipher her book. Even after being sent a letter saying that he gave up, she intuitively knows that he tried his hardest, and holds no grudge against him for it. Margaret can also tell a lot from people that she's only known for a few hours, a prime example being when she calls herself and Carrossea "birds of a feather", something that turns out to be more true than even she realises.

Margaret is very protective of her picture book, Secondary, largely since it's the key to finding out about her past before she lost her memories. When Naharu attempts to take the book from her, she can sense her despite being fast asleep, and tells her that she can't have it, going so far as to threaten to kill her. She also refuses to get rid of it even after Carrossea warns her she's being targeted, though this warning turns out to be misled. It gets to the point that even Elenore, her maid and close friend, has never taken a look at the book.

Despite her general airheadedness, Margaret is actually far from stupid, and often shows keen intuition about people or about certain dangers. She doesn't trust Moreas Lopez when she meets him at a party, and senses danger at the hotel she, Elenore and Vanessa are staying when there is a sniper nearby. She was only in a half-conscious state when Naharu tried to steal Secondary, but when Margaret sees Naharu again, she instantly knows she's the one who came into her room, and the one who's been watching her. Eventually, it becomes clear that a lot of her odd mannerisms early in the series was actually the result of initiatives relating to her mysterious past.

At her best, Margaret is a sweet, caring, wise, and imaginative person. She would do anything for the people she loves. She's willing to go to the war-torn Gazth-Sonika to find Vanessa even if it means risking her life. Because she cares so much about her loved ones, though, Margaret can snap easily when she loses someone. She finds herself wishing Madlax would die after discovering that Madlax shot her father. Blaming the loss of Vanessa on the mercenary girl, Margaret shoots and genuinely attempts to kill Madlax twice, shooting her five times the second time. All the while, she is under the spell of Friday Monday, and calling him "father." Thus, at her worst, Margaret is a vengeful, murderous person as well as someone who tries to escape reality by mentally dissociating. Madlax's creation twelve years ago happened because Margaret couldn't find the courage to shoot her father, even to save her own life and lost her memories because she couldn't cope with the truth. 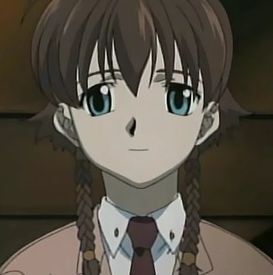 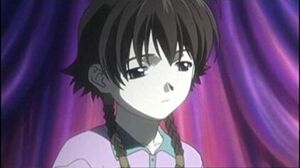 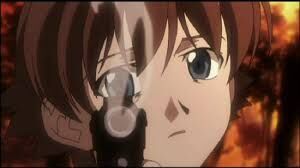 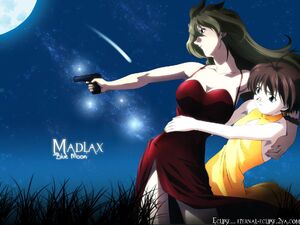 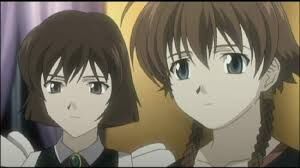 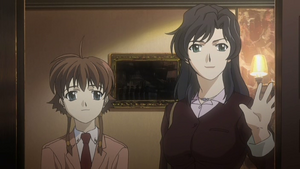 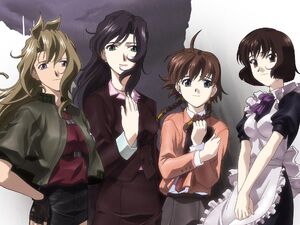 The protagonists of the series. From left to right: Madlax, Vanessa, Margaret and Elenore 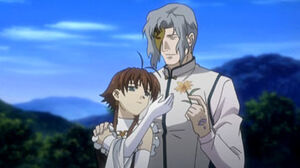