Margaret Wade is a character from Dennis The Menace.

She is born on June 17, & also a brat who picks on Dennis, but secretly loves him! She mostly cares about beauty and her glorious hair. She is also very spoiled.

Margaret has red hair. She wears a pink shirt and a black skirt. Margaret underwear is always shown in her appearances and is shown that it is white (and was not to be shown). She wears glasses and has pink bows in her hair. 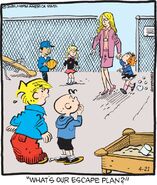 Dennis Mitchell is being so rudely Sarcastic to Margaret Wade.

Dennis made a "dirty magic vanish" trick on Margaret. 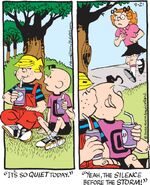 Margaret Wade got ticked off by Dennis Mitchell for when she's rudely interrupting him.

Dennis & his friends are playing grownups in front of his mom.

His Mom force his son Dennis Mitchell to apologize to Margaret Wade. 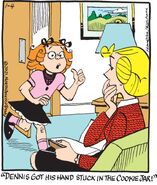 Margaret Wade is so scared of worms from Dennis Mitchell's hands.
Add a photo to this gallery
Retrieved from "https://hero.fandom.com/wiki/Margaret_Wade?oldid=2186086"
Community content is available under CC-BY-SA unless otherwise noted.