Constructive Vandalism, Lending a hand to the disenfranchised

(None seen in game)

Margarete was a spy for a foreign power, sent to China to undermine the Japanese occupation there. Under her eastern alias of Malchovich she was ordered to commit several acts of terrorism and constructive vandalism to weaken the local Japanese' influences. Despite her orders not to go through any unnecessary risks Margarete would often set smaller decoy bombs to give civilians a chance to evacuate any areas set to explode. Like the real-world Mata Hari the specific nation she is working for is never identified but is likely either France of the Netherlands. Margarete teases her handler over her radio and phone often but still preforms her duties expertly.

During a bombing of a car-depot Margarete sets off one of her decoy bombs but at the last moment sees a young-man and woman exit one of the buildings and into the her field of fire, it is too late and both get caught in the explosion. The alluring spy goes down in a panic to check on her inadvertent victims. The young man stirs and begins to look up the alluring spy's dress from the ground, further inspection of the girl confirms her health as well. Revealed that the bombs she set to save live didn't end up costing two people theirs Margarete apologizes for the blunder and wishes the two of them well saying to the young man he could think of the view he caught of her underwear as her little way of saying she was sorry, then makes haste to avoid the authorities.

Fleeing into the sewers Margarete is attacked by monsters, before they creatures can finish her off though the young man and girl fight off the creatures using supernatural powers. Margarete quickly picks herself up and plays the grateful damsel angle then formally introduces herself; the two introduce them-selves to her as well as Yuri Hyuga and Alice Elliot. Yuri had the power to turn himself into a monster by merging with the souls of other monsters he killed and Alice had holy powers. Yuri explained that the monsters she saw were attracted to Alice and himself because of their powers. Despite her cool demeanor and grateful tone the truth was Margarete was amazed to see real live monsters, a girl who could call down holy energies and a young-man who could turn into a monster and quickly became invested in unlocking their supernatural secrets to give her Nation the edge on the world stage. Margarete agreed to let them follower her out of the sewers to safety, when that didn't work she tried to get them to help her out, when that didn't work she just started following them.

After escaping from the monster infested sewers Yuri Alice, and Margarete had to fight off several Japanese soliders just outside an airplane hanger. Once the path was cleared they headed for the hanger to commandeer a plane for their escape. The hanger miraculously blew up. Further inspection revealed a small dog Yuri and Alice had seen before was radiating a powerful energy. The puppy, Alice had taken to calling "Tiny" spoke. claimed he was the great sage Dehuai, a man that had been trying to kidnap Alice and caused trouble for Yuri and Alice eailier in their adventures. Margarete recognized the name to, Dehuai was a Chinese mystic with criminal connection that had been making even more trouble for the Japanese than she was. He was also consider the lesser of two evils and one of the few people her country would consider a worse ruler of China than the Japanese government. Dehaui was posssessing the puppy and used it as a conduit to unleash his powers. When Yuri began mocking the megalomaniacal sage for attempting to sound scary while in the form of a tiny mutt Dehuai transformed the puppy into a large hell-hound and attacked the three heroes. Margarete helped defeat the monster but then quickly ran off just before the Japanese reinforcements arrived to arrest Yuri and Alice.Before Yuri and Alice could be apprehended though Margarete drove a hijacked plane between them and the officers and had them jump in. Despite taking a few shots the plane took off and the three flew off.

The plane would give out after a few hours of travel and began to crash, it was all Margarete could do just to soften the descent. The plane landed on the docks of the ocean side village of Dalian. Though all three were more or less unharmed the plane was completely totaled. In the Dalian Margarete met another of Yuri and Alice's friends with supernatural powers, the oracle Zhuzhen. Zhuzhen was another enemy of Dehuais and upon seeing his two acquaintances again decide it was fate that he travel with them to help them escape/defeat Dehaui. So Margarete continued traveling with Yuri and his friends intent on neutralizing the mad sage, finding a way to capture Yuri and his friends and have a grand adventure in the process.

Margarete is a self-serving hero, while she has her own agenda she won't do anything that endangers innocent people. Over the course of the game, her false persona of a goodhearted rogue becomes more and more the actual her. By the half-way point of the game she is more concerned with saving the world and protecting her interesting new friends than bringing them in to be pawns of her government. By the end of the game she openly admits to Yuri what she was trying to do from the beginning and tells him that traveling with him and his friends had helped her re-prioritizes her values.

Margarete is the only playable character in the game with no supernatural powers what-so-ever; This does not stop her from keeping up with the rest of the party in the least however. Margarete has access to cutting edge technology, cutting edge for the year 1913 anyway...Margarete has heavy fire hand guns high precision sniper rifles, cryonic grenades and a cell phone. Whenever Margarete needs a little extra gadget here and there she uses her phone to call in for her handler to drop off one. The phone calls use up Margarete's Mana Points as if she was using magic. Though Margarete has low MP at first it grows with her level and eventually becomes quite easy to call in her gadgets, however all-in-all her special moves are less useful than the moves of other party members. Margarete's real skill comes from her weapon. While her gun shots are harder to hit and require much more focus for the player than other party members their critical hit is almost 50% for each shot so if the player has gotten good at mastering the game's Judgement-Ring system Margarete will quickly becomes the reliable crit-hitter.

While most characters have a stat or two that gives them a distinctive function in the party Margarete's stats all remain fairly balanced, this ensures she is the best at nothing but the second best at everything and is a good form of support for whatever type of team the player tries to put together. 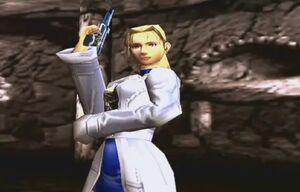 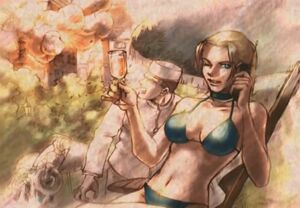 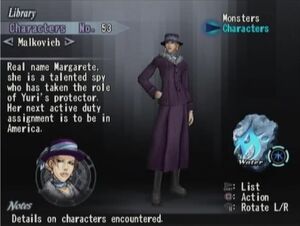