Maria Calavera is one of the main characters in the animated web series RWBY she was once the famous huntress known as The Grimm Reaper.

She is voiced by Melissa Sternenberg.

In Maria's elderly appearance she has long white hair made up into a bun, a grayish blue dress covered by a dark blue cloak with shoulder guards, brown shoes and a bead necklace. She uses one of her scythes from her huntress days as a cane and due to the loss of her eyes has mechanical prosthetic eyes in place of where her original eyes used to be.

In her younger days, Maria had short black hair, silver eyes, a long grayish blue dress with grayish teal areas with gold strings and a teal hood and cloak, long light brown boots, and occasionally a skull mask with light blue designs on it.

Maria was once a famous huntress going by the name of The Grimm Reaper, But during a mission to kill a Nevermore Maria was ambushed by an assassin and her associates who had been sent to kill her on the orders of Salem because of her silver eyes. While Maria was able to defeat the other assassins the leader proved to be strong, during the fight Maria's mask was shattered and she had her eyes sliced out as she began screaming in agony with Tock taunting her and saying that since Maria no longer had her eyes she might be able to convince her to spare her life. Maria was able to feel around for her 2 scythes and threw one near Tock and hit the switch on the other one sending it straight into Tock's back before decapitating her with the other scythe. After this incident Maria retired from being a huntress and had her eyes replaced with mechanical ones made by Pietro Polendina.

Several years later, Maria boards a train to Argus so she can reach Atlas to have Pietro check up on her eyes. During the ride the train is attacked by Manticores and Sphinxes and part of the train is separated. It's here that Maria meets Team RWBY as well as Qrow Branwen and Oscar Pine/Professor Ozpin, Maria introduces herself to the group with Yang Xiao Long saying that they've gained a defenseless old lady and witnesses the power of the Relic of Knowledge in which the entity Jinn shows them the backstory of Ozpin and Salem. Later after taking refuge in an abandoned estate Maria learns just in time of the resident Apathy that are living in the tunnels below the estate and assisting Ruby Rose in using her Silver eyes to defeat them, After arriving in Argus Maria has a talk with Ruby at the Cotta-Arc house after they learn of Maria's rivalry with Atlas soldier Caroline Cordovin. In an attempt to get to Atlas Maria hides inside Weiss Schnee's luggage as she gets on board a ship, as Yang brings Blake Belladonna to the radar tower to disable it as Ruby, Qrow, Oscar, Jaune Arc, Nora Valkyrie, and Lie Ren await to be picked up. However the plan hits a snag when due to the interference of a vengeful Adam Taurus, Blake is unable to disable the radar, Maria attempts to impersonate Atlesian soldier jargon only to be instantly found out due to her voice then proceeds to escalate the situation by taunting Cordovin leading the group to being forced to fight Cordovin. With Maria and Oscar staying on the ship. After defeating Cordovin and saving Argus from the encroaching Leviathan with Cordovin's help. Maria along with the others arrive in Atlas. After landing in Mantle they make their way to the pharmacy where Maria introduces them to Pietro who almost immediately recognizes Team RWBY and later watches as the group defeats a pack of Sabyrs and is arrested by the Ace Operatives. During most of the events of Team RWBY and their allies' work in Atlas Maria stays with Pietro and helps him in his lab. After James Ironwood orders the Ace Operatives to arrest Team RWBY and their allies, Maria and Pietro arrive to find the Ace Ops defeated and help Team RWBY escape and later help Penny Polendina who joins them. Maria, piloting the Manta with Team RWBY, Jaune, Nora, Ren, Penny, and Pietro fly away from Atlas as they hear over the radio that multiple hostiles are showing up on the radar and witness Salem's arrival in Atlas with an army of Grimm behind her. 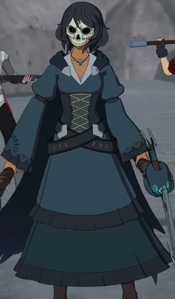 Maria as The Grimm Reaper