Capture heroes who were against the registration act (formerly)

Maria Hill is a fictional character that appears in Marvel comics and it's universe, and is a supporting character in most of the Iron Man comics. Hill is an agent (and later director) of S.H.I.E.L.D. She is also an ally of Nick Fury and the Avengers, mainly it's prominent members, Iron Man and Captain America.

She was created by Brian Michael Bendis and David Finch.

In the Marvel Cinematic Universe, she is played by Cobie Smulders, who also played Robin Scherbatsky in How I Met Your Mother.

Maria Hill was born in Chicago, Illinois to Ed Vernon and an unnamed mother, who died while in the hospital. As a result of losing his wife, Ed blamed Maria for her death, and abused her when she was young. The abuse she received from her father turned her cold and troubled, and she decided to join the United States Marine Corps after having a falling out with him.

After her services in the military, Hill decided to join S.H.I.E.L.D., and her first mission was to rescue Agents Bradley and Reynolds. During the rescue, Hill relieved Reynolds due to seeing him as mentally unfit to take command, and when her effused to listen, he was caught in enemy fire during a skirmish. Bradley accused Hill of field misconduct, but she was found innocent by a tribunal, which gained the attention of Nick Fury.

Fury revealed that Bradley and Reynolds were triples agents, and Nick asked Maria to kill Bradley. Afterward, Hill was promoted to the rank of Colonel, but she was haunted by the images of Reynolds and Bradleys' families. Fury gave her a pill to induce amnesia and to forget about, but before she took the pill, Maria put a hit on herself that would trigger as soon as she retired.

Maria Hill has a strong loyalty to S.H.I.E.L.D. she is tough-minded and is well known for going by the book. She is hardworking, detail oriented and highly professional willing to carry out odors. However she will question decisions that are deemed to risky.

Brave, level headed and strict she takes her responsibility very seriously and is dependable. Maria is known to follow through with plans. Though Maria Hill is calm, steady and stable she is also headstrong, ruthless and will do whatever it takes to get the job done. Although Hill is a a professional agent who goes by the book doing whatever it takes this doesn't stop her from helping people when she feels like it's the right thing to do.

She is a no nonsense agent who is duty bound how finds comfort in upholding rules and laws prioritizing work above everything else. Maria Hill is a fearless ally to those she respects Hill also prefers her allies to be strong and able enough to take care of themselves just like she does for herself. Maria prefers to work in a realm and environment of fact, knowledge rather than feelings where it is clear to see what is right and what is wrong.

She abides by the law but will also take things into her own hands. She is fierce and slick agent who has the guts to do what others won't do. Her determination and efficiency makes Maria Hill an excellent agent and second in command. Though she prefers to go by facts instead of feelings and is ruthless her strong will and stubbornness is what drives her to do the right thing which also makes her willing to be helpful to anyone who needs help.

Although she is loyal to S.H.I.E.L.D. Maria Hill is an independent woman who is very intelligent. She is tough both mentally and physically. 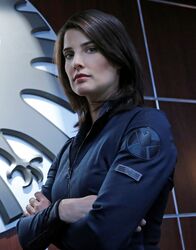 Maria Hill in the MCU tv series, Agents of S.H.I.E.L.D.
Add a photo to this gallery

Retrieved from "https://hero.fandom.com/wiki/Maria_Hill?oldid=2248372"
Community content is available under CC-BY-SA unless otherwise noted.