Maria Santiago (née Casagrande) is one of the main characters of The Casagrandes and formerly a recurring character on The Loud House.

She is the mother of Ronnie Anne Santiago and Bobby Santiago, the ex-wife; of Arturo Santiago, the sister of Carlos Casagrande, and the daughter of Rosa Casagrande and Hector Casagrande. She works as a nurse at an unknown hospital, who saves people's lives.

She is voiced by Sumalee Montano.

Maria made her first appearance in "Shell Shock", where she came home in a fluster, having done a lot of work at the hospital. She kindly greeted Lincoln when she came home and was delighted to see that Ronnie Anne had done all her chores and kindled congratulated her.

In "The Loudest Mission: Relative Chaos", Maria took Ronnie Anne and Bobby and moved them back to The Casagrande Apartment to live with them, thinking it was the right decision to make. When she heard that Ronnie Anne didn't want to move, she agreed to take her back home. However, the street cats came by and destroyed the apartment, so they had no choice other than to stay in The Casagrande Apartment, which Ronnie Anne was forced against her own will to get used to but thanks to Maria, she helped her get adjusted to her new life.

In "The Loudest Thanksgiving", Maria returned home, covered in blood after saving someone's life by doing a horrific surgery on them. However, it was revealed that this was actually just a ketchup packet that exploded on her in the hospital cafeteria. She and Ronnie Anne teamed up to try and get Bobby to stay with them for Thanksgiving.

In "Friended!", Maria bragged about all the amazing things she did, when curing a patient with a rancid toe fungus. She also punished Ronnie Anne for destroying one of the apartment rooms, by making her clean up the mess she made.

In "Store Wars", Maria peeled oranges for free at the bodega and even powered through being extremely sleepy just to keep their store alive, when it competed with the Hi 'N' Buy across the street.

In "Vacation Daze", Maria looked high and low across all of Great Lakes City to find Ronnie Anne, when she was lost. 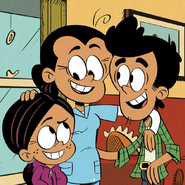