Member of the Levantine Brotherhood of Assassins

Being with her family.
Serving the Templars (formerly).

She was an English noblewoman living during the High Middle Ages, who joined the Templar Order prior to the Third Crusade and later became the personal steward of Robert de Sablé. She would act as his decoy when the assassin Altaïr Ibn-La'Ahad was tasked to eliminate all members of the Templar Order, but she would be betrayed by the order when Armand Bouchart become then new grand master. Maria decided to defect to the Assassins due to falling in love with Altaïr, and would start a family with the assassin afterward.

She is voiced by Eleanor Noble.

Maria Thorpe was born in Leicester, England in 1161 to unnamed parents, who would punish their daughter in her youth for being more of a tomboy. Once she reached the age of eighteen, Maria was forced to marry Peter Hallaton, the lord of Leicestershire, but the marriage would be annulled four years later. Wanting dreams of honor and glory, Maria decided to leave her home to join the Crusaders to fight in the Crusades. Due to it being uncommon for women to participate in the Crusades, Maria disguised herself as a man and later gained the attention of Templar grand master Robert de Sablé. Despite Sablé learning of her true gender, he continued to support her and made Maria his personal steward. Maria would become a high ranking member of the Templar Order, and though she didn't believe in Sablé's beliefs, she would serve him due to his support.

In 1191, the assassin Altaïr Ibn-La'Ahad was tasked by his mentor Al Mualim to eliminate nine high ranking members of the Templar Order. When Altaïr eliminated the other eight, de Sablé would guise Maria to be his decoy so he could leave to Arsuf and publicly told others that he would be attending the funeral of Majd Addin. Maria appeared at the funeral as the decoy, and the ruse succeeded as Altaïr was in disbelief, asking her was it sorcery. Despite thinking that she would be killed by the assassin, she was spared, but revealed Robert's plans before Altaïr left. He would then go on to eliminate Robert, thus causing a great blow to the Templars, as well as the death of Mualim since he was a puppet for the order.

After de Sablé and Mualim were killed by Altaïr, Maria was left behind by the Templar order as Armand Bouchart became the new grand master, and had no intention to have her travel with him. She would be confronted by Altaïr, and attempted to battle him before being defeated and interrogated by the assassin. When refusing to give any information, she was taken prisoner as Altaïr believed that having her would allow him to obtain leverage for her freedom. She would escape from the assassins and attempted to warn Bouchart about Altaïr, but he instead accused Maria of being a spy and ordered her to taken to prison. Before she could placed into a cell, Maria was rescued by Altaïr, who managed to reason with her into coming into his custody.

During the journey in Kyrenia, Maria would escape once again while leaving the assassin to be killed, but decided to assist Altaïr in fighting Bouchart. After stopping the Templar, Maria informed Altaïr that she didn't plan on rejoining the order due to seeing their ambitions as being malicious for humanity. Though she intended on traveling far to India, she decided to accompany Altaïr to Masyaf due to his shared interests. The two would later in fall in love and have two sons together, and Maria would join the Assassins despite not being trusted by her fellow members.

Maria appears as a minor character in Assassin's Creed II, appearing in a memory that Desmond has due to the bleeding effect. Miles saw Maria have a romantic moment with Altaïr after having him climb up to the tower of Acre.

After their son Sef was killed under Abbas Safin's order, Maria attempted to calm Altaïr from attempting to get revenge on his former friend. She would travel to Masyaf with Altaïr in his attempt to reclaim control over the Assassins, and would be mortally wounded by Swami when Altaïr used the apple of Eden. Before dying, Maria told her husband to be strong, and her corpse was left behind as Altaïr was forced to leave with their son Darim.

Altaïr would suffer from the loss of his wife, but would reclaim control over the Assassins by stopping Abbas years later and didn't return out of vengeance. The memories of Altaïr meeting Maria from the past would be relived by their maternal descendant, Desmond Miles, who was kidnapped by Abstero Industries to relive said memories to find the locations of the apple of eden. 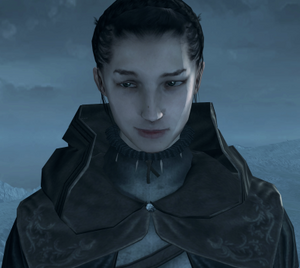