Marida Cruz (マリーダ・クルス,Marīda Kurusu) is a main character of Mobile Suit Gundam Unicorn. Before her life as Marida, she was actually one of Glemy Toto's Ple clone army and was labeled as Ple Twelve ( プル .トゥエルブ, Puru Touerubu) and the only surviving clone after the battle between the Glemy faction and Chara Soon on Mobile Suit Gundam ZZ.

She is voiced by Yūko Kaida in the Japanese, and by Tara Platt in the English version.

At first, Marida is a tough, strong, and cold young woman but very loyal to her master and her former master (Glemy Toto and Suberoa Zinnerman) She refers to Captain Zinnerman as "Master", which irritates him, and loyally carries out his orders. Marida also sees herself in the ideal of misconceived notion that Newtype are to serve as weapons. Marida also seems to have a deep loathing hatred for the concept of the Gundam, as when one appears her objective changes to completely and thoroughly annihilating it.

When being controlled and manipulated by the Vist Foundation, she returns to her "original persona" when she was still "Ple Twelve" in her youth, becoming more emotionless, unstable and ruthless just like Ple Two before her defection from the Glemy Faction.

After meeting with Banagher Links, and particularly after her recovery from the Banshee's cockpit, Marida's personality begins to change, and a unseen kindness begins to become apparent. The true depth of her attachment to Zinnerman is later revealed, when instead of "Master" as she once had, she calls him "Father".

A capable pilot and artificial Cyber Newtype, Marida is also proficient in military martial arts. When piloting the Kshatriya Marida primarily utilizes the funnels, usually about 18 at any one time, to overwhelm the enemy with multi-directional ranged attacks. This tactic tends to quickly eliminate weaker enemies while restricting the movement of stronger enemies. Should the funnels prove to not be enough Marida will then close in and use beam sabers. She tends to hold the mega particle cannons in reserve.

Glemy is her creator and her original master. Even though Glemy only used her and the rest of the clones as soldiers, she proved was genuinely loyal to him. After realizing that he's already dead and witnesses all her sisters being killed, she begin shouting at him on confusion and asks him what she should do do.

She is the twelfth clone of Elpeo Ple's clone army.

Ple Two is the "oldest" clone and her "older sister". In Dynasty Warriors Gundam 3, during a combo SP attack between her and Banagher Links, Banagher nearly calls her "Marida".

She is her DNA origin which Glemy uses to create Ple's Clone. Not much is known about her relationship with her and its unknown if she ever meets Marida. However, Marida shown shares the same favorite food with her

Due Mineva status as the princess of Zeon, Marida initially have a mission to brought back Mineva to back to Zeon side. Even her refusal, Marida claim she just follow her order to bring her back and chasing her with her Zinnerman right-hand, but she save by Banagher make which make her to retreat. After both Marida and Mineva success being rescued from Vist Foundation, Marida encourgae to Mineva to always follow her own heart will. Later on, she help Mineva to talk with Full Frontal when he wanted to chasing Banagher via Mineva Kshatriya cockpit. After knowing Marida tragic death, she apologize to her and Marida reply that she must always on Banagher side.

Suberoa is her new master and a man who saved her from the Madam who abuse her by make her as a young prostitute. She often refers to him as "Master" which irritates him. But as the story progress, she sees him not only as her master and more as her father, as shown when she begins calling her "Father" after being saved by him and Banagher. In turn, Suberoa also sees her not only as a subordinate, but also as his own daughter. In a flashback, Suberoa shows her a picture of him with his daughter named "Marie Zinnerman" and said if she was alive she would be the same age as her. After her death, her spirit comes to him, and thanks him because he give her a second chance at life 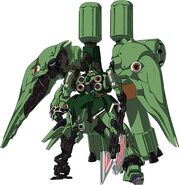 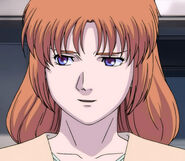 Marida save Alberto Vist before being taken by him

Marida when being brainwashed by vist foundation

Marida heroic smile (before her death)

Retrieved from "https://hero.fandom.com/wiki/Marida_Cruz?oldid=2291017"
Community content is available under CC-BY-SA unless otherwise noted.