No information
Marie Mjolnir is a supporting protagonist in the manga/anime series Soul Eater. She is a Death Scythe who was originally in charge of Oceania before the resurrection of the Kishin Asura. She is currently partnered with Franken Stein, and is a teacher at the DWMA. She is also one of the Eight Mysteries of DWMA, known as "The Woman with the Eye Patch Who Destroys Toilets in the Dead of Night". When wielded, she takes the form of either a tonfa or a hammer.

She is voiced by the late Chieko Honda in the Japanese version of the anime and Colleen Clinkenbeard in the English version.

In her physical appearance, Marie is a young woman who possesses large, caramel eyes, and long blonde hair.

Zig-zags are prominent in Marie's appearance. She wears her hair loosely with no bangs, and it forms a zig-zag part on her head. Marie wears a black dress with a large, golden, zig-zag pattern in the front from the waist down. Parts of the dress are made of a different fabric. These parts are located on the long sleeves of the dress from the elbows down, and a part below the chest that resembles a girdle-like shape. She wears a pair of white, high-heel shoes that also appear to have a zig-zag pattern on them.

Finally, Marie's most iconic piece of clothing is her large, left eyepatch, which is decorated with a thunderbolt insignia that also appears in her Weapon form.

While hunting Justin, her clothing changed to feature a black sleeveless jacket over a shirt, shorts with patterning similar to her original dress and sandals. These clothes bear a noticeable resemblance to those worn by Joe Buttataki.

Marie is an incredibly caring and gentle individual, and openly expresses her personality at all times. She shows great compassion in creating and maintaining a kind relationship with anyone she meets, and has yet to fail in doing so; almost always being shown with a smile on her face. Whenever a friend is in need, she is always open to help in any way she can no matter the situation. In general, she is always concerned for the well-being of others. She also dislikes seeing others unhappy, and is always up to cheering the individual up. People around Marie acknowledge all of these characteristics, and she is popular among her students. She is even able to befriend individuals who are often viewed upon as annoying or disliked among many.

She does not enjoy being put to work, and often seeks for ways around doing so. Her initial intention after having become a Death Weapon was to retire, however, upon not being able to do so, she chose to take Death Weapon charge over Oceania because she viewed it as the most peaceful and easy location to take charge of. When she is assigned to partner with Stein, she even begins to lightly shed tears because of her complete loss of the motivation to work, to which Stein reassures her that he believes such obsessive tendencies will become useful. Over time, these feelings towards work disappear, mostly as the result of the discovery that she really enjoys teaching at the Academy.

She has an undying urge to find a husband and get married, but has yet to successfully maintain a long-term relationship with someone. She always devotes herself to every man she dates but they always seem to end up breaking up with her. Azusa's suggested reason of this is because that Marie put so much devotion into the relationship that the men become so overwhelmed with pressure that they feel the obligation to run away from her. However, Marie denies this, and finds it hard to believe that she is the source of the problem. She has once even become so desperate for love that she almost decided to marry a toilet, seeing it as something that is accepting of anything and everything.

Marie is a forgiving and generally unprejudiced person. This is demonstrated most when Marie forgives Crona for slipping one of Medusa's snakes into her drink, allowing Medusa's group to hear conversations between she and Stein and to also increase the latter's madness.

She also has a horrible sense of direction, and often gets lost in the Academy, even though she's been acquainted with its layout for years. She has gotten lost a notable four times, and even Crona and Ragnarok were shown to be more aware of where the Teacher's Office was than her. She is so bad with directions that a location that can usually be gotten to in a matter of minutes can become a two hour search. This direction problem more than likely originates from Marie guessing that a location is in a random direction rather than actually calculating where she is going.

Despite her usually friendly and calm demeanor, Marie is very quick tempered when someone says something that she doesn't approve of, sometimes even resulting to violence by striking this person with one of her powerful punches. She is not aware of how much they hurt. 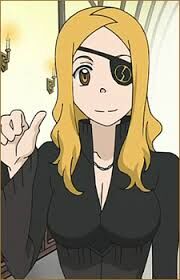 Retrieved from "https://hero.fandom.com/wiki/Marie_Mjolnir?oldid=2194193"
Community content is available under CC-BY-SA unless otherwise noted.