To get the rare cards (failed)

To control the Egyptian God Card (failed)
To gain the power of Pharoah (failed).
Defeat and kill his evil self Dark Marik/Yami Marik in order to apologize to Atem for his misdeeds that he did from the past (succeeded after he redeems himself)

Redeemed Psychic
Marik Ishtar is the leader and founder of the Rare Hunters, younger brother of Ishizu Ishtar and heir to the Tomb Keepers. Marik was formerly the main antagonist of the Battle City arc. After the defeat of Odion, Marik's alter ego, Yami Marik takes over his body and replaces him as the series' main antagonist.

Later on in the Dawn of the Duel arc, Marik redeems himself and fulfills his birthright as a Tombkeeper. Marik is often considered to be one of the foremost adversaries in the series. Despite being a villain in a majority of his scenes, Marik was ultimately the one who defeated Yami Marik and not Yami Yugi, thus earning his redemption.

Marik's usual outfit consists of a long purple cape with a gold chain at the front, the same outfit worn by the Rare Hunters, as well as a sleeveless black shirt and beige combats. He wears gold earrings, neckwear, armbands, and bracelets all up his wrists. His white-blonde hair is neatly arranged as Marik.

As a civilian, he still wears the gold earrings, neckwear, armbands, and bracelets all up to his wrists, a sleeveless purple shirt, black pants, and black shoes. While in Battle City, he often wears a KaibaCorp Duel Disk on his left arm. In the manga, he instead wears khaki pants and a black singlet under his purple shirt, the eventual clothes of Yami Marik.

As a child, Marik was an innocent boy who desired to see the outside world, despite his clan's laws forbidding him from doing so, and was willing to sneak out to fulfill his desire. He cared for his sister Ishizu Ishtar very much and also considered Odion to be his brother, despite not being blood related.

Marik bore a grudge towards the Pharaoh because he was forced by his own father to guard the family's carving with his life via a ritual of having carvings (in the anime's Japanese version and the original manga) or tattoos (in the anime's English version) onto his back which brought intense pain during and after the ritual and robbed him of his freedom.

With the intense pain and his hatred towards the Pharaoh, he spawned his second personality Yami Marik to deal with the pain. A year later when his father brutally tortured Odion for helping Marik and Ishizu to sneak outside, Marik was unconscious while Yami Marik killed his father and woke up with no recollection of his father's murder. Immediately afterwards, he sees a loyalist to the Pharaoh had come to warn him about the dangerous path he had taken. Marik thought that the loyalist murdered his father, leading to Marik's betrayal of the clan to get revenge against the Pharaoh.

While leading the Rare Hunters in his quest for world domination and freedom, Marik became cruel and uncaring, willing to brainwash people to do his bidding, force them to cheat, and use cruelty on his behalf, the victims included Bandit Keith and Strings. He was not above using death to punish his subordinates for failure, such as Arkana and Lumis, nor did he care about sacrificing Rare Hunters to test the fake "The Winged Dragon of Ra" cards which produced severe injuries and death. He even threatened his sister Ishizu with the Millennium Rod for getting in his way and ordered Odion to use the fake Ra card against his will. He still retained his love for his family, despite his mistreatment of them.

Marik's name is also commonly read as Malik by fans. Some fans believe that it was made fairly obvious that it was meant to be romanized as "Malik", given the meaning of the name "Malik", and given the fact that Malik is a fairly common Arabic name. Additionally, "Malik" can be defined in Arabic as "the controller," "king", or "one who rules", a well-fitting name given his excessive use of the Millennium Rod, mind slaves, and his portrayal as a dominating villain. Marik Ishtar is known as "Malik Ishtar" in Indonesia.

Likely Marik comes from the fact that often "l" and "r" alternate in names from Japanese to English, though this was not necessarily the intended substitution. The substitution occurs because there is no 'l' in the Japanese language- the closest they have is 'r'.

Some speakers of Japanese, however, argue that 'Marik' is not meant as 'Malik', because the translation in Japanese isn't correct. If his name was Malik, and Kazuki Takahashi had translated it to Japanese, than the correct name would be 'Mariku', as there is no singular 'k' in the Japanese alphabet. Despite some fans arguing that the substitution of 'l' to 'r' from English to Japanese would mean that 'Malik' would become 'Marik', the entire name would've had to have been translated for this theory to be correct.

Marik is not the Romanized version of Malik: Mariku is. This is why some fans say that Marik is simply meant to be Marik.

Marik's name is derived from the Arabic word Malik ("king") and the Mesopotamian deity Ishtar. Ishtar is a vengeful Babylonian goddess according to the 3000 year-old epic of Gilgamesh.

Malik is considered a correct romanization of 3 different Arabic words. These include:

If Marik's name was based on Arabic, then the second one (مالك) is the most correct equivalent naming-wise. It could have been chosen based on the meaning of the other two names though, as the three words are usually written with no clear differentiation in English.

Marik's family guarded the tomb of the Pharaoh for generations and two Millennium Items (the Millennium Rod and Millennium Necklace) were passed on to Marik and his sister Ishizu Ishtar. Marik was forbidden to leave the Pharaoh's tomb due to his father's fear that the freedom and marvels of the outside world would further divert Marik's attention from his heritage. Marik no longer wanted to become a Tombkeeper, so his adoptive brother Odion Ishtar asked if he could take Marik's place but was refused. When Marik was forced to take the initiation ritual to become a full Tombkeeper, Marik spawned his second personality Yami Marik from the pain he endured. A year later, Marik and Ishizu took a forbidden trip to the surface but their father found out and attempted to kill Odion. In the midst of his father's torture of Odion, Marik blanked out and his second personality Yami Marik emerged for the first time to resist his father's punishment and claimed the Millennium Rod for himself. Ignoring his father's orders to put it down, Yami Marik used its powers to smash him against the wall. When Ishizu protested, she suffered the same strike. Yami Marik then proceeded to kill his father. After Yami Marik was sealed away in Marik's body by Odion, Marik believed that the Pharaoh had ordered the loyalist Shadi to kill his father, due to Odion saying Shadi had killed him, trying to be a big brother and hiding from Marik that it was actually his alter ego who had done so. This increased Marik's grudge and resentment to the Pharaoh, causing him to create the Rare Hunters.

As a teenager, Marik was the leader of the Rare Hunters organization as he wished with the Millennium Rod to obtain the three Egyptian God Cards so that he could unlock their power for himself, gain the title of "Pharaoh" and set his family free from the duty of the Tombkeepers (In the dub, he wants the God Cards and the Millennium Puzzle, so he can unlock the Pharaoh's power for himself and use it to rule the world). He also had a hidden agenda - to get revenge on the Nameless Pharaoh's soul for killing his father as he mistakenly believed that it was the Pharaoh's fault. Although he and his Rare Hunters uncovered "The Winged Dragon of Ra" and "Slifer the Sky Dragon" from where Maximillion Pegasus had hidden them, they were unable to uncover "Obelisk the Tormentor", which was taken by Ishizu and given to Seto Kaiba.

Marik, Bakura and Odion took places in the quarter-finals. Marik took the guise of Namu while Odion pretended to be "Marik" as nobody had actually met him in person (sans Yami Bakura). After Bakura was defeated by the Pharaoh in the first quarter-final match, Marik had Odion use a counterfeit Ra card in his quarter-final against Joey. When Joey suspected that he was not dueling the real Marik, as Odion had been dueling with honor while Marik was cruel, sadistic and as by far as Joey was concerned, a dirty cheater; Marik ordered Odion to use the counterfeit Ra to "show" he's Marik but Ra was angered by this and wrathfully struck both duelists with lightning, ultimately rendering Odion and Joey unconscious. After Joey defeated Odion, the latter reveals to the Pharaoh and Joey that he is really Marik's servant while Marik began to suffer sudden headaches. After Odion was further rendered unconscious, Marik revealed himself to the Pharaoh, Joey, Kaiba, Téa,Tristan Taylor, Duke Devlin, Mokuba Kaiba, Serenity Wheeler and Mai Valentine. Suddenly, Marik cried out in pain as his darker personality gained control of his body. While Ishizu dueled Kaiba in the fourth quarter-final match, Marik tried to call out to Ishizu but his dark personality trapped Marik in a "prison" built out of his own fear and pity. After the quarter-finals, Marik's reformed soul teams up with Yami Bakura to stop Yami Marik, but failed when Yami Marik uses Ra's other abilities, which were unknown to Marik. However, Marik (through Téa) warned Ishizu to hide Odion from Yami Marik in order to save his life.

In the final duel between Yami Marik and the Pharaoh, their weaker selves were the victims of the Shadow Game being played. As the duel went on, Yami Marik became the dominant host of Marik's body while the real Marik's soul slowly faded out of existence. This Shadow Game gave him a clear edge, for when the Pharaoh lost Life Points, Yugi's body would fade away, and when Yami Marik lost Life Points, the original Marik would fade away. As Marik realizes his mistakes of making people suffer, he speaks out through Téa, begging the Pharaoh for his forgiveness and asks him to defeat Yami Marik, even if it meant he would go to the Shadow Realm. While they dueled, Odion woke up and made Marik realize he had to accept his responsibility for being a Tombkeeper. With this confidence, Marik overpowered his evil self and made him the victim of the Shadow Game, and then forfeited, destroying Yami Marik. Marik gave the Pharaoh the Millennium Rod and the Ra card.

Marik then revealed the Tombkeeper's initiation. The carving of the pharaoh's memory onto the back of a tomb guardian (using either a hot dagger in the manga and the Japanese version of the second series anime, or a tattoo in the English second series anime although the dagger was still seen in the flashback) on his back. Fulfilling his duty as a Tombkeeper, Marik returned to Egypt to start a new life.

In the Millennium World arc, Marik, Ishizu, and Odion lead Yugi and his friends to the tomb of the Pharaoh in order for Yugi and Atem to have a final duel in order to determine whether Atem will move on to the afterlife or remain in the present. Atem loses, allowing him to pass on to the afterlife. After he left, the Millennium Items sank into the ground and the tomb collapsed. Marik and the others managed to escape and Marik and his family end up staying in Egypt. 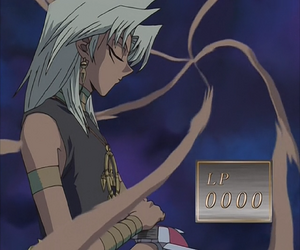 Retrieved from "https://hero.fandom.com/wiki/Marik_Ishtar?oldid=2188531"
Community content is available under CC-BY-SA unless otherwise noted.