Marin (The Legend of Zelda)

The Legend of Zelda: Link's Awakening

Singing Ballad of the Wind Fish.

Looking out towards the sea.

See the rest of the world beyond Koholint Island.

Marin is the deuteragonist of The Legend of Zelda: Link's Awakening. She is a human girl who lives with her father, Tarin, in Mabe Village on Koholint Island. She is a good-natured girl who loves to sing and has a strong sense of morality and justice. Throughout the course of the game, Marin and Link apparently develop an attraction to one another, although this is never discussed, nor developed into a relationship.

She was voiced by Ruriko Aoki in Hyrule Warriors and Yuko Natsuyoshi in The Legend of Zelda: Link's Awakening, who also voiced Himeko Mashima in Show By Rock!! Mashumairesh!!.

Marin is a young beautiful girl with long red hair with a hibiscus flower on her hair and brown eyes. She wears a short sleeves blue dress with a pink sash, a red pendant, and brown sandals.

In Hyrule Warriors, Marin uses a bell for combat. The bell uses the water element and can summon the Wind Fish to attack her foes.

When she saw Link in the shore, she took him to bed for him to rest. He mistakes her for Princess Zelda.

in Super Smash Bros. Melee, Marin appears as an collectionable trophy who only can be obtained by unlocking all secret levels and characters. In Super Smash Bros. Ultimate, Marin appears as an advanced-ranked support spirit who grants the fighter a resistance to Inverted Controls. Her spirit battle is a timed battle against Zelda and Link on the battlefield form of the Tortimer island with a sleep-inducing floor.

Marin's artwork from The Legend of Zelda: Link's Awakening.

Marin's artwork from The Legend of Zelda: Link's Awakening DX. 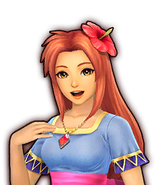 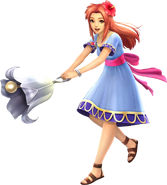