Marine the Raccoon is a supporting character in the Sonic franchise. She is a 7-year old anbothormpic raccoon of Southern Island, and Sonic and Tails' first ally when they are transported into the home dimension of Blaze the Cat. She dreams to be a swashbuckling sea captain one day, and insists on treating Sonic, Tails, and even Blaze as her "crew" throughout the game.

Marine is an excitable and hyperactive young raccoon from Blaze's dimension, who dreams of having epic adventures. At several points in the game, Marine runs off after seeing something that catches her interest, causing Sonic and Tails to have to go looking for her. Though she means well, Marine also constantly rushes off to adventure and has to be rescued multiple times. However, this sometimes helps the gang as they manage to find Whisker's hideout when she destroyed the statue and she manages to get the Jeweled Sceptre from him when he captured her. 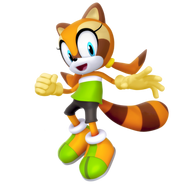 Marine talking to Sonic and Tails

Marine is abducted by the Ghost Titan.