Start a Wiki
Marion Crane is the main character who appears in the 1960s Alfred Hitchcock Psycho and in the book, as well as its 1998 remake of the same movie and one of the supporting characters from the season 5 of Bates Motel. She is Lila Crane's sister who owns her boss' money and moves in the Bates Motel to be recruited by Norman Bates and his mad mother Norma. She is killed by Norman Bates who was dressed as Norma Bates with an knife.

She was portrayed by Janet Leigh in the original movie and by Anne Heche in the 1998 remake when in the prequel Tv series, she is portrayed by american singer Rihanna.

In the original movie, Marion died from mortal wounds after being killed by Norman Bates, Marion in the 1998 remake died from the same fate.

Marion Crane owns her boss' money to move in Bates Motel recruited by Norman Bates and his mad mother Norma who was undried and died after being murdered by Norman. Norman recruits her and everything was fine. Marion soon discovers that Norman Bates is an murderer who killed Norma after being tormented by her.

Meanwhile, Marion decides to take an shower quietly, then Norman Bates who was dressed like Norma attacks and mortally wounds her with an knife. Dying Marion Crane takes her last breath and passed away, her body is taken by someone and hidden by him.

In Bates Motel series, Marion Crane is portrayed as an black woman and she is played by Rihanna, the female singer and actress in the movie and musics. 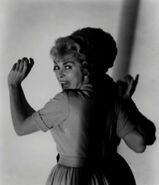 Anne Heche as Marion Crane in the 1998 remake

Add a photo to this gallery
Retrieved from "https://hero.fandom.com/wiki/Marion_Crane?oldid=1603446"
Community content is available under CC-BY-SA unless otherwise noted.