Aid Indy on his Adventures (succeeded)

She is portrayed by Karen Allen.

Raiders of the Lost Ark

Marion Ravenwood was the only daughter of a professor, Dr. Abner Ravenwood. She was in love with Indiana Jones, but they had a very complicated relationship.

Marion worked at a saloon in Nepal, where Indy convinced her to help him find the lost Ark of the Covenant using the headpiece to the Staff of Ra. She refused and booted him out. The demonic Nazi spy Arnold Toht slithered into the pub and interrogated her into giving him the headpiece until Indy came to her rescue.

Marion reluctantly agreed to join him and they began their journey into a market in Egypt. They get attacked by robbers and Nazi soldiers employed by Jones's archenemy, René Belloq, who capture Marion and fake her death, but not before she fends them off and hides in a straw basket. After discovering the Ark's whereabouts, Indy finds Marion tied up in Belloq's tent. He prepares to free her but, realizing that if he does so he'll give away their hiding place, leaves her behind.

When Indy is tossed into the Well of Souls, Toht throws her in with him. They manage to escape and chase after the Ark, but are captured once again. Fortunately, the Ark unleashes its power, killing Belloq, Toht, Dietrich, and the Nazis. Marion and Indy manage to get together again after their quest.

Kingdom of the Crystal Skull

After the events of Raiders of the Lost Ark, Marion and Indiana were engaged. But a week before their wedding, Jones broke of their engagement and ran away. When Indiana ran away, Harold Oxley stopped talking to him and Marion gave birth to Henry Jones III (or Mutt Williams as called in the 4th movie) and married Royal Air Force veteran Collin Williams, who later died in combat leaving Oxley to help Marion raise Mutt.

In 1957, Harold Oxley goes to Peru in search for the legendary crystal skull and intends to take it to Akator after hearing the legend of the skull. But as his search goes, the KGB is also aware of the legend and Oxley and they go to Peru to find him. Before Oxley is caught, Oxley manages to mail a letter to Marion to give it to Mutt to give it to Indiana Jones while Marion goes to Peru to look for Oxley. After the events in Peru, Marion and Indy re-marry each other.

Marion surprised to see Indiana Jones arrive at her bar.

"Indiana Jones. I always knew some day you'd come walking back through my door."

Marion slapping Indy across the face.

Marion hearing Jones ask her for the headpiece to the Staff of Ra.

Marion telling Indy that her father is dead.

Marion and Indy having a conversation.

Marion being offered $3,000 by Indy to give him the headpiece.

After being given the money, Marion tells Indy to come back tomorrow.

After Indy leaves, Marion looks at the headpiece around her neck.

Marion in thought as she looks at the headpiece and the money.

Marion by the candlelight.

Marion putting her savings away. 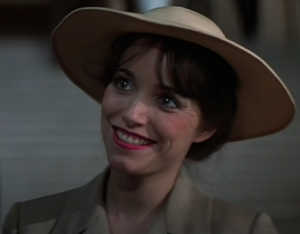 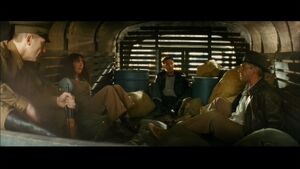 Marion with Indy and Mutt. 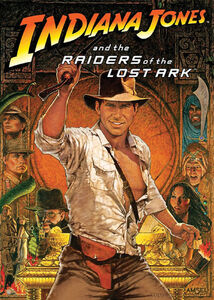 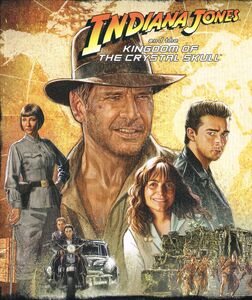