Playing with his cousins

Going on misadventures with Henry (formerly)

Mark Evans is the titular main protagonist of the 1993 psychological thriller film The Good Son.

He was portrayed by Elijah Wood who later played Huckleberry Finn in the 1993 film adaptation of The Adventures of Huck Finn, Frodo Baggins from the Lord of the Ringsmovie trilogy and voiced Spyro from The Legend of Spyro game series, 9 from the movie of the same name, Mumble from Happy Feet', and Wirt in Over the Garden Wall.

Mark is first shown playing a soccer game in Arizona until his father, Jack, picks him up and takes him to see his dying mother in the hospital. He keeps promising her that she will not die, but to no avail, as he is later at her funeral.

As his father has a business trip in Japan, Mark is dropped off to live in Maine with his family on his father's side: Jack's brother Wallace, sister-in-law Susan, nephew Henry, and niece Connie. Henry and Mark get along at first, but in discussing the death of Mark's mother and that of Henry's baby brother Richard, Henry is fascinated with death, and that makes Mark uncomfortable. Henry pressures Mark into smoking a cigarette, though Mark says it gives them cancer. Henry says that he will die soon or later anyway.

What leads Mark into finally finding out how bad Henry is when Henry tricks him into helping him drop a dummy called "Mr. Highway" from a bridge, causing a traffic accident, much to Mark's shock. When, Henry Evans shows no remorse even after his evil actions so far, Marks tells Henry that he is sick. Later, Mark reads Henry's little sister Connie a bedtime story. The next day, he tries to save Connie (whom Henry pushed onto thin ice at a skating rink), but many people get in his way. He tries convincing his aunt and uncle how bad Henry is, but neither listens, and he is dismissed as lying. He calls his father (who is still in Japan) to explain Henry's psychotic behavior, and the latter tells him he'll come back, but in the meantime, to see Dr. Alice Davenport (who later says she doesn't believe in evil). Mark warns her that she should.

At another point, because he thought Henry poisoned the food, Mark tries disposing of it, but is stopped by Aunt Susan and Uncle Wallace.

Later, after Henry has egged Mark into killing him, Wallace has caught Mark about to kill him and locks him in his study to await Dr. Davenport. As there is no way out, he sees Susan and Henry going out for a walk, and he breaks out of the study using a chair. At the last minute, he arrives at a cliff and comes to his aunt's rescue when he pounces on Henry (who was trying to drop a rock on his mother) and they fight until they both fall over the cliff (but Susan catches them).

Despite wanting to save them both, as Henry was her son, and Mark was right all along, she realizes that each boy required both hands to pull up, and thus she can only pull one boy up, and has to decide which one to save. Finally, with Mark's grip slipping due to her bloody hand, and now knowing Henry's evil nature (and that he would try to kill her again), after saying "Henry!", Susan painfully forces herself to drop Henry in order to pull Mark up. They both see Henry's dead body wash away and share an emotional embrace.

Finally, Mark is back in Arizona. As he looks on at the horizon, he reflects (in a closing narration) that sometimes, late at night, he thinks about Susan and wonders if she'd make the same choice if she did it again. He says he'll always wonder, but knows he'll never ask. 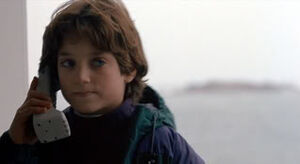