Get off the heroin (succeeded)

He was portrayed by Ewan McGregor, who also played Obi-Wan Kenobi in the Star Wars prequel trilogy, Valiant in Valiant, Ian Rider in the movie adaptation of Stormbreaker, Christian in Moulin Rouge!, and Rodney Copperbottom in Robots.

In the film, Renton is a young man who lives in Edinburgh with his parents and is friends with Daniel "Spud" Murphy, Simon "Sick Boy" Williamson, Tommy MacKenzie and the psychopathic Francis "Franco" Begbie. He also would take heroin with Spud and Sick Boy.

One day, Renton decides to give up on drugs and goes to a nightclub with his friends where he meets and falls in love with a girl named Diane, and makes out with her at her home, but discovers the next morning that she is 15 years old. Renton attempts to distance himself from Diane, but she threatens to tell the police if he doesn't keep in touch with her. Afterwards, Renton returns to heroin and is caught along with Spud stealing from a bookshop. Whilst Spud goes to prison, Renton is spared after he enters a Drug Interventions Programme, where he takes methadone. However, Renton wishes to have a more substantial high and goes to the flat of his drug dealer Swanney "Mother Superior", but nearly dies from an overdose. Swanney sends Renton in a taxi to hospital, where he is saved by the nurses.

Afterwards, Renton's parents take him home and lock him in his room in an attempt to get him to sweat the heroin out of his system. As he goes through intense withdrawal, Renton has nightmares such as Diane singing, his friends giving him advice, the dead baby of a fellow addict crawling on the ceiling and his parents being on a TV game show hosted by Dale Winton answering questions on HIV. Renton is later taken by his parents to be tested for HIV, to which the tests come back negative. In an attempt for a new life, Renton leaves Edinburgh and moves to London and becomes a property letting agent whilst keeping in touch with Diane. However, much to Renton's annoyance, Begbie (who is on the run after committing armed robbery) and Sick Boy (now a pimp and drug dealer) arrive in London and move in with him.

The trio return to Edinburgh to attend the funeral of their friend Tommy, after he dies from HIV related toxoplasmosis and reunite with Spud, who had been released from prison. After the funeral, Sick Boy suggests a lucrative but dangerous heroin transaction. Renton tests the heroin on himself to test it's purity. The quartet return to London, where they sell the heroin to a dealer for £16,000. The group celebrate at a pub, where Begbie glasses and beats up a man after he bumped into him, causing Begbie to spill beer on himself and injures Spud's hand, when he gets in the way. The following morning, whilst the others are still asleep, Renton steals the money and shares a gaze with Spud before leaving the hotel room they are in. Renton leaves £2,000 for Spud in a locker before leaving Scotland, hoping to live a better life.

Renton reappears in the sequel, which takes place 20 years after the original film. In the film, Renton has been clean and sober for 20 years, but his life has otherwise fallen apart: he is recently unemployed, his wife has left him, and he has no money. He returns to Scotland, where he reunites with Spud and Sick Boy to help the latter pull off one last scam, and runs afoul of a vengeful Begbie, who has just escaped from prison. 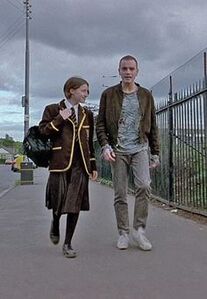 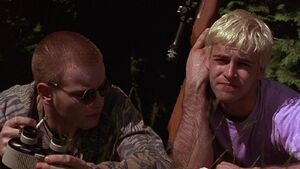