Queen Firefly
Queen of the Fireflies

Leader of the Fireflies

Have Ellie sacrificed to create a vaccine for humanity (failed)

Marlene is the leader of an extremist anti government group known as the Fireflies devoted to fighting the totalitarian rule of the military in a post apocalyptic world in 2033. Marlene serves as the main and final antagonist heroine of the video game The Last of Us in the last act of the game.

She was portrayed by Merle Dandridge, who is famous for voicing Alyx Vance in Half-Life 2, and also played Evelyn and Sister Catherine in Uncharted 4: A Thief's End, another Naughty Dog video game series.

Marlene was the leader of the Fireflies, a group who fought against the Military totalitarian rule during the apocalypse. Marlene met and befriended a woman named Anna, who asked the former to protect her daughter, Ellie as her dying wish. Agreeing so, Marlene protected Ellie and had her taken to a military boarding school, keeping an eye on her. In addition, Marlene was close with Tommy, who eventually left the Fireflies, but told her that she could trust his brother Joel to get a job done.

During the events of The Last of Us: American Dreams, Marlene saves Ellie and Riley Abel from the infected, and fought against smugglers. Riley wanted to join the Fireflies, but Marlene rejected the notion, going as far to point a gun at her, but drop it when Ellie took Firefly soldier's gun. Marlene revealed to Ellie that she was a close friends with her mother, and gave her a switchblade before sending the two back to the boarding school.

Marlene changed her tone and recruited Riley into the Fireflies, and had her kill an infected during her initiation. When Ellie asked to join, Marlene refused and forbid Riley to see her again, even going as far to send Riley to another city in a unit. Despite this, Riley sneaked away and spent time with Ellie, which would lead the two to be bitten by infected, with only Ellie surviving the bite. Seeing that Ellie didn't turn, she realized that they can create a vaccine to kill off the infected.

Events of the Last of Us

Wanting to keep morale within the Fireflies, Marlene attempted to buy weapons from Robert, but things when awry and she got critically injured. Marlene returned to him to only find him dead by Joel and Tess, his former allies whom he betrayed. Marlene greeted the two and told them they could get their guns back if they help her smuggle something out of the city. Returning back to her hideout, Marlene introduced the two to Ellie, and told Joel to take Ellie to another hideout as Tess and her verified the weapons.

After recovering her weapons, Marlene and her men left Boston and dealt with many casualties along the journey. Despite their loses, Marlene and her men became optimistic and made it to Salt Lake City in early 2034. At the hospital, Marlene learned that Joel and Ellie were suppose to meet the Fireflies at the Capitol Building, but were found dead. Marlene went into deep depression, questing her leadership, and doubting the Fireflies cause. By July, Marlene learned that the Fireflies found an older man and a young girl who nearly drowned, and had them brought to the hospital.

Bringing Ellie to the hospital, the doctors revealed that extracting the parasite would kill her, and asked Marlene to give the go ahead to do the surgery. Shocked (thinking they would have done it regardless of her decision), she allowed the go ahead, but questioned it on two of her recordings. Meeting with Joel, Marlene revealed that Ellie was prepped for surgery, but also replied that she could die. When Joel objects to the surgery, Marlene sympathizes with him, but stops him by having Ethan knock him in the back, and told him that this was too important than both of them. Marlene then ordered Ethan to take Joel away, and if he fought or tried to stop the operation, have him killed.

After Joel's massacre and carrying Ellie to the parking lot, Marlene attempts to stop him at gunpoint. She goes on that Ellie can't be saved, as she would eventually be killed by clickers, thugs, or sexually assaulted. Marlene then told him that this would be what Ellie wanted, and tried to show peace by lowering her gun and raising her hands. She was then shot by Joel, who placed Ellie in the car to getaway. Bleeding to death, Marlene pleaded with Joel to let her go, but he responds that she will come after her, and shoots her in the face. Joel would lie to Ellie about what happened, stating that there was no cure, but Ellie appears to not believe all he says, even telling him to swear before the game ends.

Her death was avenged by Abby Anderson, the daughter of Jerry Anderson, who was the head surgeon Joel killed to rescue Ellie. Wanting revenge for her father's death, Abby brutally tortured and killed Joel in front of Ellie. Ellie would later swear vengeance for Joel's demise alongside Joel's younger brother, Tommy. 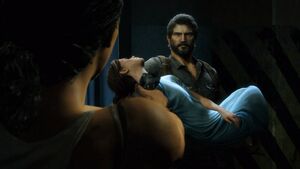 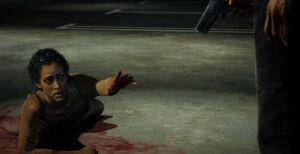 Marlene pleads with Joel to let her go. 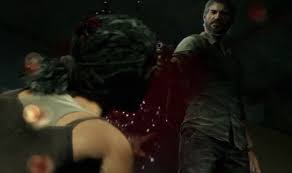 Marlene's death.
Add a photo to this gallery

Retrieved from "https://hero.fandom.com/wiki/Marlene_(The_Last_of_Us)?oldid=1932547"
Community content is available under CC-BY-SA unless otherwise noted.