Caring for his son.
Protecting his friends and son.
Being impatient.

Find and rescue Nemo and reunite with him (Finding Nemo, succeeded).

Marlin is the main protagonist of Finding Nemo, and the tritagonist in its sequel, Finding Dory. the father of a little clownfish named Nemo, who is taken to Sydney by divers. Marlin gets a blue tang named Dory to help him get there.

Marlin is a nice and caring parent to Nemo, but can also be a bit impatient and easily irritable. Due to the tragic death of his wife and Nemo's would-to-be siblings, he is also protective to the point of getting on Nemo's nerves, which ultimately results in a conflict that goes unresolved until they reunite.

He is voiced by Albert Brooks who had voiced Jake in Dr. Dolittle and Jess Harnell.

In Finding Nemo, Marlin is first seen with his wife Coral, and they are about to be parents of many unborn children, Marlin plans to name all the males "Marlin Jr." and all the females "Coral Jr.". However Coral insists they name one male "Nemo". Marlin says they'll only name one Nemo and he wants the other to be "Marlin Jr.". However, that same day, a barracuda attacks their house, knocking Marlin out cold. When Marlin wakes up, He find the house empty, realizing that Coral and the other babies were all killed by the barracuda. However Marlin finds only one of his eggs. He names it Nemo, since that was one of the names his wife wanted to call one of her children. Through the years, Marlin has became overly protective over Nemo, much to his annoyance. Marlin feels that the ocean is way too dangerous and doesn't let him swim in open water; he even doesn't want Nemo to go to school.

One day, Marlin eventually allows Nemo to go to school. After Nemo and his classmates leave, the other fathers say they're going to the drop-off, some place that Marlin fears is bad news for fish. When Marlin catches Nemo about to swim into open water, he quickly stops him and tells he can't swim well, and embarrasses Nemo in front of his classmates. Nemo then gets furious with his father and swims into open water. Marlin tries to order Nemo to come back, but he won't listen. Suddenly Nemo is captured by a pair of scuba divers. Marlin chases the divers' boat, but is unable to keep up with it. While frantically asking other fish for help, he bumps into Dory, a blue tang who claims to know where the boat went. However, Dory soon forgets who Marlin is and the fact that he was looking for the boat, because as it turns out, she has short-term memory loss.

After a run-in with some vegetarian sharks named Bruce (whom they first encountered), Anchor, and Chum, Marlin and Dory find a mask that Dory reads that says, "P. Sherman 42 Wallaby Way Sydney," but after reading the mask in another scene, a hungry anglerfish shows up, roars at Marlin and Dory, then chases after them. However, the duo manage to trap it by using the mask to tie it around a rock. Dory remembers what the mask says and on the way continues to repeat it until Marlin comes upon a group of Moonfishes and tries to ask them, but they only make fun of him, so Dory asks them for Marlin and they give them the directions to Sydney, to which Marlin thanks them. But unknown to the clownfish, the Moonfish also give Dory a warning not to swim over a trench. However, when Marlin and Dory reach the trench, Marlin makes Dory swim over it, much to her warning and they get stung by a group of jellyfish and knocked out. When Marlin wakes up, he finds that he's riding a sea turtle named Crush on the East Australian Current. Marlin asks Crush if Dory is okay and Crush points down to another turtle where Dory appears to be "dead". Marlin swims down to her, sees the scars on her side from the jellyfish stings, and blames himself for her getting hurt. But Dory wakes up from her "death" because she was playing Hide-and-Seek with the turtle kids. Marlin then tells Dory and the turtle kids about his and Dory's journey.

Later, after they left the East Australian Current, Marlin and Dory get swallowed by a whale, which was chasing krill.

Later on, when Marlin got sick of being stuck in the whale, he tried to break himself free, but fails, and he drops onto the whale's tongue, crying. Dory asks him if he's okay, but Marlin doesn't answer, so Dory swims down to him to comfort him and immediately says the same eight words "There, there. It's all right. It'll be okay" to do so. Marlin tells Dory his promise to Nemo, but Dory explains to her friend that he can't never let anything happen to him. Fortunately, the whale shoots them out of his blowhole and into Sydney Harbor. They finally find Nemo in the dentist's office and charge in, aided by Nigel the Pelican, but the plastic bag the dentist is holding with Nemo inside it falls onto a sharp dental tool and springs a leak. Marlin believes Nemo to be dead and tells Dory they have to go their separate ways, unaware that Nemo has escaped the dentist and his spoiled niece, Darla. Eventually Dory brings Nemo back and father and son are reunited. Suddenly, a fishing net captures Dory and some groupers. Marlin and Nemo work together to free the latter. The two of them reconcile and Marlin knows he has to let his son go.

In the sequel Finding Dory, he and Nemo help Dory find her family and try to find a way to free her from the Institute. With help from two lazy sea lions, Fluke and Rudder and a common loon named Becky, they manage to reunite with Dory. 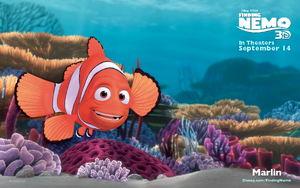 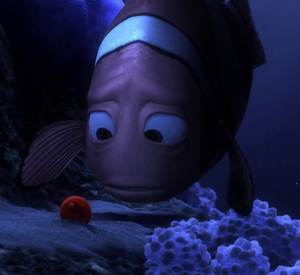 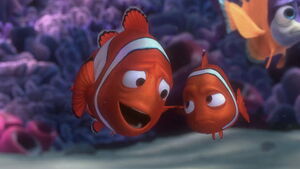 I'd feel better if you'd go play over by the sponge beds. (Nemo glares at him) That's where I'd play..." 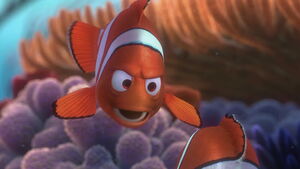 "YOU THINK YOU CAN DO THESE THINGS BUT YOU JUST CAN'T', NEMO!!!" (Marlin Yells Furiously at Nemo) 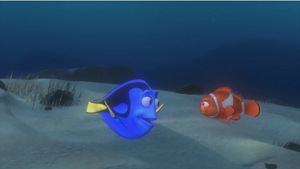 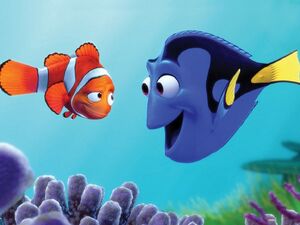 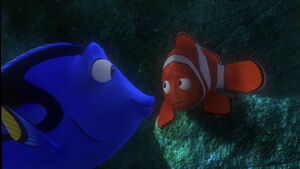 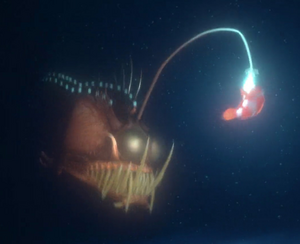 Marlin vs. the furious angerfish 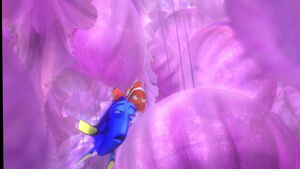 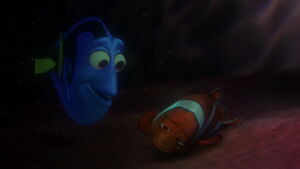 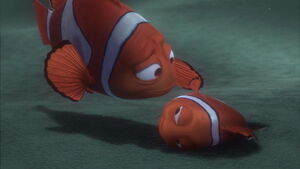 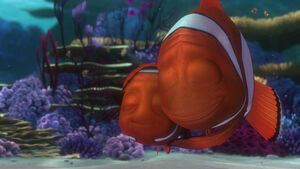 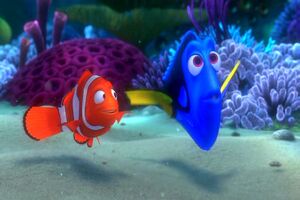 Marlin and his friends on the Finding Dory Blu-ray