Heroes Wiki
Register
Don't have an account?
Sign In
Advertisement
in: Outdated Articles, Mature, Attack On Titan Heroes,
and 37 more

Member of the Military Police (formerly)

Become an official and even commander of the MP (abandoned, transferred).
Cure the inefficiencies inside the military from within (abandoned).
Join the Survey Corps to help humanity's greater cause of survival (succeeded).

Marlowe Freudenberg is a character from the series Attack on Titan. He is a disciplined and honorable young man whose main goal in the first season is to dismantle corruption in the military but would later try to help humanity towards survival.

He was voiced by Tomokazu Sugita in the original Japanese version and Todd Haberkorn in the English dub.

Marlowe was a member of the 104th Trainee Corps Northern Division. He was able to make it into the top 10 and joined the Military Police.

Marlowe first appears as a member of the same Military Police Brigade unit as Annie Leonhart and is assigned to safeguard the Survey Corps convoy transferring Eren Yeager as it goes through Stohess District. When Marlowe questions the assignment, his superior leaves Marlowe in charge of the task so he himself can slack off. Irritated by the higher-ranking officers' lack of morals, he explains to his fellow companions the reason for joining the Military Police Brigade. He goes on a rant about how the Military Police is severely corrupt and when he is in command, he will make it the faction that it is supposed to be, by eliminating all the fraud. This provokes Annie to state that Marlowe being in charge would only be a disadvantage, saying that he reminds her of an old friend that just like him, only go against the flow of the world.

While on duty, Marlowe notices higher ranking officers that are illegally selling ODM Gear to a trading association. He proceeds to go up to them and explain their wrong doings, but the officers refuse to take him seriously, when Marlowe becomes aggressive threatening to report them, they begin to beat him up. Annie and Hitch interfere, and when the officers notice that there are civilians watching, they decide to let him off the hook. Furious, Marlowe reaches for his rifle, contemplating executing them while their backs are turned. As he wrestles with his desire to kill them, Annie offers to help him, reminding him of his desire to punish the corrupt. Annie's words overawe Marlowe, and he allows the officers to leave. Frustrated with himself for not following through, Marlowe asks if the friend Annie had compared him to would have killed them. Annie confirms the possibility, and Marlowe laments that he is just like the others in their squad, going with the flow of the world.

Marlowe is later seen observing the clash between Eren and Annie, he questions his superiors about the battle, oblivious that Annie was one of the two Titans he had seen.

Clash of the Titans Arc

Marlowe and Hitch are seen cleaning up the remains of the battlefield left by Annie and Eren. Marlowe is confused why they are being kept in the dark for why the battle even happened, Hitch then tells him that there isn’t really a “true” reason why the clash happened to begin with. 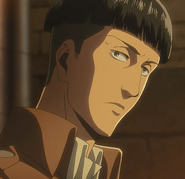