To find The Book of Forbidden Knowledge

Marnie McBride is the daughter of Ross and the late Rosemary McBride and is the main protagonist of the 2004-2005 BBC Scotland fantasy drama series Shoebox Zoo.

She was portrayed by Viviene Endicott-Douglas.

Following the death of her mother Rosemary, Marnie along with her father move from their home in Denver in America to Ross's homeland of Edinburgh in Scotland where on her eleventh birthday she comes across a shop owed by a wizard named Michael Scot, who gives her the Shoebox Zoo consisting of Edwin, Ailsa, Wolfgang (who is Michael's son) and Bruno) who were once humans but were turned into their toy animals (Edwin became an metal eagle, Ailsa became a copper snake, Wolfgang became a wooden wolf and Bruno became a stone bear) by Michael for taking away his Book of Forbidden Knowledge. They were at one point owned by Rosemary in her childhood, before her mother Dorothy returned them to the shop she got them from after Rosemary became too obsessed with them.

Marnie tries to look for the Book of Forbidden Knowledge in order to help the Shoebox Zoo return to their human forms. She also faces against a shapshifter named Toldeo, who wants the book for himself. She also helps Wolfgang (who had been working with Toledo in secret to spite Michael) reconcile with his father. However afterwards, Toledo, in front of Marnie, Michael and the other members of the Shoebox Zoo, kills Wolfgang in retaliation by throwing him into a lit fireplace.

Marnie does find the book but learns that it is fake and discovers that the real book is in America.

During the quest to find the book, Marnie becomes corrupted by darkness, but eventually overcomes it.

Upon finding the book, Marnie has to destroy it when Toledo and the Dawn Queen (possessing a woman named Aurora) want to get it. Marnie later restores Wolfgang back to life.

Afterwards, Marnie sadly bids farewell to the Shoebox Zoo and leaves them in the same junk shop her mother purchased them years ago so someone else can inherit them.

Her abilities include telepathy, telekinesis, teleportation, the ability to shoot lightning and even resurrection. She also wears a necklace with one of Edwin's tail feathers on it (which was previously owned by Rosemary) which can detect dark magic. 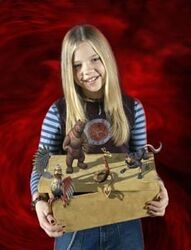 Marnie with the Shoebox Zoo
Community content is available under CC-BY-SA unless otherwise noted.