Tending to her looks

Protect the Morlock society and keep them safe

Sarah Rushman, better known as Marrow, is a mutant in the X-Men series. She is a mutant with a different mutant power: detachable bones grow right through her skin. She is a member of the sewer dwelling mutants the Morlocks. Marrow was embittered by the harsh life she lived, first in the Morlocks' dark tunnels, and then fighting for survival in the dimension she was sent to by an evil mutant named Rasputin. Despite her hostile attitude, Wolverine decided to become her mentor when she joined the X-Men. He succeeded in training her to work as a member of the team. As Marrow slowly mellowed, she grew close first to Gambit, and later to Colossus.

A mutant able to control her bone growth, providing her with armor, clubs, and knives. As a child, she was taken in by the Morlocks where she would form the terrorist group Gene Nation before joining the X-Men. Her allegiances have shifted frequently since then. She was de-powered after M-Day.

Sarah's real name is unknown, as well as her place of birth or who her parents really were. From a young age she manifested bones which grew out of her face. This obvious mutation led her to be taken in by the Morlocks - mutants that felt themselves too hideous to live above ground - cursing herself to a life underground. She may even have been among the first group of Morlocks.

As an adult she often fought the X-Men, partly because she felt that their fight for peaceful co-existence with humans was foolish and also for revenge because of their inability to save the Morlocks during the Mutant Massacre. Some say she was jealous of their beauty and ability to be normal as well.

Sarah was a little mutant with the mutant power to see kindness in every person. She was a very close friend to Callisto, who saw her as a daughter. Marrow is one of the few surviving Morlocks to join Callisto's New Morlocks which is a group of mutants and humans living together.

Like most other mutants Marrow was one of 90% to lose her mutant powers although she would eventually get them back and managed to get extra abilities. Sarah Rushman regained her powers but at the cost of her unborn child even though her powers were restored Cable pointed out that the powers came from something else. Those powers could have come from her child so the doctor who helped her could have used the baby's powers to give Marrow new ones. If that is the case then the powers came at a cost she didn't expect. Another example of the unborn baby's abilities probably being transferred to Marrow is Sarah's personality change. After getting new powers but thinking her original powers were restored Marrow now has more of a child like behavior after the experiment. Because Marrow was one of the mutants to lose her powers and regain them she did not make it on the government's list of 198 mutants.

Marrow is Morlock who has survived many terrible events in her life. She survived the Mutant Massacre on the Morlocks avoid capture when surviving Morlocks had been taken the camp known as Neverland. Managed to escape death at the hands of Masque where other Morlocks weren't so lucky. One of the few members to survive the death of many Gene Nation mutants. The Gene Nation was another group of Morlocks but smaller Sarah Rushman survived from having her heart ripped out by Storm because she had two hearts. One of the mutants who survived the experiments done by the Weapon X Project and by Weapon Plus. Lost her powers on m-day managed to survive with out her powers and regain them. One of the living and surviving depowered mutants from the terrorist Morlock group called X-Cell others include Callisto, Blob and Fatale. Former member of the X-Force who joined them after Cable saved her when she was left for dead.

Later she was brainwashed by S.H.I.E.L.D. forcing her to become a agent to help them destroy Life-Model Decoy robots that were a danger to humanity. Faked her suicide with the help of Spider-Man so she could be free from S.H.I.L.D. however do to the brainwashing to help keep her implanted memories. She developed a split personality of her mutant self Marrow and the personality of a teenager with child like behavior that personality would grow stronger for Sarah after the experiment done on her to restore her lost powers. Marrow also survived the flooding in the Morlock Tunnels caused by Mikhail Rasputin Thornn helped Sarah and tried to find other survivors Sarah Rushman also lived through the battle of The Hill. Signs of Marrow's split manic child like personality goes all the way back to The Hill she became more savage because of Mikhail Rasputin and his Morlocks but those were just the early stages over time her manic and child personality grew much more after regaining her powers.

One of the many things that Marrow has gone through in her life was being held prisoner by MRD know as the Mutant Response Division however this only happened in the cartoons. Marrow managed to escape with the other prisoners after they had been rescued. She became friends with a reassembled go Sentinel know as Rover. Marrow survived many terrible events and horrible this that most Morlocks did survive she survived the mutant massacre caused by the Marauders she managed to avoid being captured and taken to the Neverland concentration camp. Marrow managed to survive the flooding of the sewers only to me taken by Mikhail who corrupted her she also managed to survive the battle at The Hill where Mikhail got many Morlocks killed. She is also one of the few survivors from the mutant groups known as Gene Nation, X-Cell and Weapons Plus well most other members from those teams are dead. Marrow has survived being held as a prison and being to become a soldier as well as a weapon and managed to survive experiments and tests that were made on her when she was held at government facilities. However was not one the lucky mutants to keep her powers after m-day but losing her powers helped keep her for the government's list of 198 mutants then she managed to get her powers with out the government knowing or keeping track of her. Although she was brainwashed by S.H.I.E.L.D. and used by them working with them helped keep Marrow from getting into trouble and kept her from being taken by the government.

Marrow's mother figure Callisto was one of the members of the X-Cell along with Marrow the X-Cell was another group of Morlocks but smaller and more evil than the original bigger group of Morlocks. The group was formed after m-day and attacked people on who they thought were involved with stealing the powers of mutants. Blob the former member of the Brotherhood of Mutants was also a member of the X-Cell. Marrow, Callisto, Fatale and Blob were some of the members who survived when the X-Cell fell apart. While members like Elijah Cross, Reaper and Abyss died. 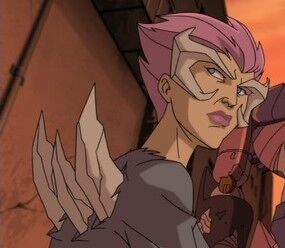 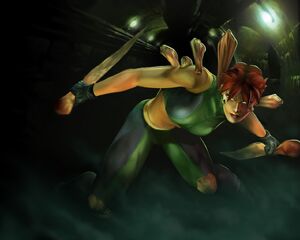 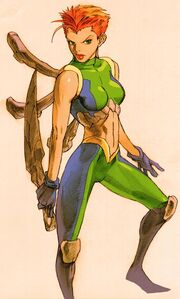 Marrow in Marvel vs. Capcom 2 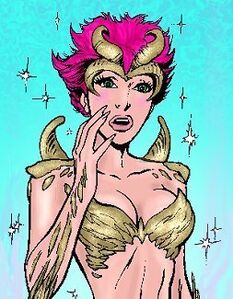 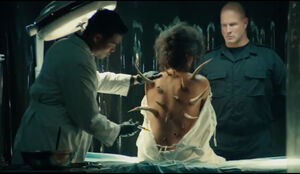 Marrow when she was a kid living in the with the Morlocks.