Sarah Rushman better known as Marrow is a mutant in the X-Men series. She is a mutant with a different mutant power: detachable bones grow right through her skin. She is a member of the sewer dwelling mutants the Morlocks. Marrow was embittered by the harsh life she lived, first in the Morlocks' dark tunnels, and then fighting for survival in the dimension she was sent to by an evil mutant named Rasputin. Despite her hostile attitude, Wolverine decided to become her mentor when she joined the X-Men. He succeeded in training her to work as a member of the team. As Marrow slowly mellowed, she grew close first to Gambit, and later to Colossus. 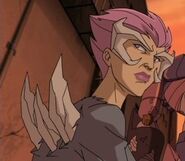 Marrow in X-Men Legends
Add a photo to this gallery
Retrieved from "https://hero.fandom.com/wiki/Marrow?oldid=439328"
Community content is available under CC-BY-SA unless otherwise noted.