Use of various tools and gadgets

Playing with the other pups when there's no emergency

Being there for Ryder

Win against the Cheetah in a race (Succeeded)

Continue to beat enemies of the PAW Patrol

Put out fires and give medical attention if necessary

Marshall is a Dalmatian pup and one of the five tritagonists from the Nick, Jr. show PAW Patrol. He is a big help to the patrol by using his ladder to climb up to high places and using his water hose for certain missions.

Starting in one of the Season 2 episodes ("Pups Save Jake"), Marshall is also the medic pup.

Marshall is voiced by Gage Munroe in Season 1 of the North American version and Drew Davis in Season 2.

Marshall is a Dalmatian puppy with blue eyes. His usual mission outfit consists of a red vest, a firefighter helmet, and a pup pack that contains a water cannon (that is used as a fire hose). In his EMT uniform, he wears a red, yellow trimmed cap, and his pup pack is switched for one that contains various medical supplies. He has puffy smoke for spots. As a Mighty Pup in Thunder Bay, he wears a black net cap with different logos of rock bands on it (Megadeth, Metallica, Death).

Among the members of the PAW Patrol, Marshall is the oldest and could be considered the "comic relief" character, as he usually acts very silly and clumsy and is quite accident prone. He is easily excited and somewhat air-headed, and not very coordinated. However, in the movie, he is completely opposite. He is brave, confident, strong, feisty, sassy, smart, and loyal. His loyalty and braveness is also shown in the series. He is very friendly as well, especially towards birds (such as Fuzzy, the gosling he befriends in the episode "Pup Pup Goose").

Marshall is captured along with his friends 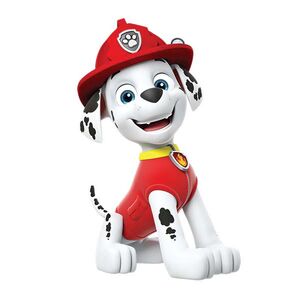 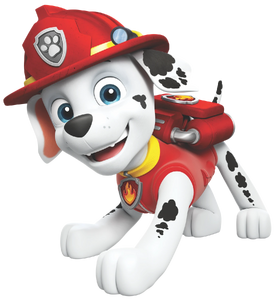 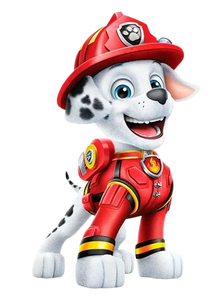 Paw Patrol: The Movie
Add a photo to this gallery 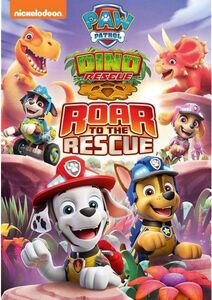 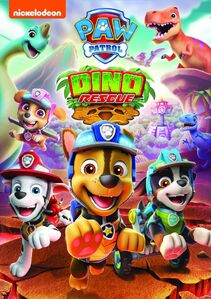 Retrieved from "https://hero.fandom.com/wiki/Marshall_(PAW_Patrol)?oldid=2318490"
Community content is available under CC-BY-SA unless otherwise noted.