Marshmallow is the secondary tritagonist of The Annoying Orange Series. He/She is Midget Apple's best friend.

Usually, Marshmallow is not angry or frustrated. However, in the episode Best Fiends Forever. He/She got very angry because Grapefruit burns a picture of Marshmallow's favorite unicorn, Princess Butterfly Kiss. He/She then proceeds (offscreen) to attack Grapefruit which caused the house to explode. This side of his/her personality would become more common in later episodes. he often laughs and has the same sense of humor of Orange. He has a funny laugh that goes, "Hehehehehe!" and "Yay!". Orange and he seem to be close friends. Orange doesn't annoy Marshmallow at all. Marshmallow also has a high-pitched, squeaky voice and has the personality of a child (and it is possible that he still is).

Marshmallow is a cheery, bubbly little soul; he/she is always happy but will instantly switch to the emotion that suits the current problem, it is shown that when he/she sneezes, magic, sparkling glitters spray out of his non-existent nose. He/She enjoys "rainbows, puppies and kittens and flowers and Rainbows and clouds and bunnies and rainbows" (as he said in the Annoying Orange meets Charlie The Unicorn Spoof). He/She is never sad, angry or unhappy unless the situation justifies it. He/She also has a profession in writing song lyrics, despite the overuse of rainbows in them. 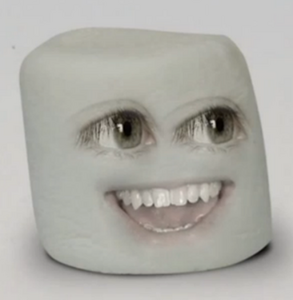 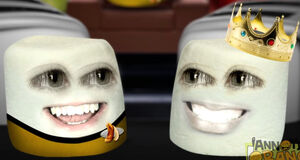 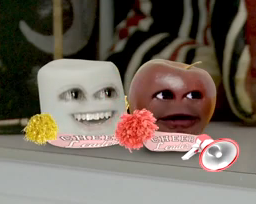 Retrieved from "https://hero.fandom.com/wiki/Marshmallow_(Annoying_Orange)?oldid=2006140"
Community content is available under CC-BY-SA unless otherwise noted.