Martha Kent (née Clark), also known as Ma Kent, is a fictional character in the DC comics and universe, and a supporting character in the Superman comics. The wife of Kansas farmer Jonathan Kent, Martha would help him raise their adoptive son Clark, who would become the legendary superhero, Superman.

She was created by Jerry Siegel and Joe Shuster, first appearing in Superman #1 in June of 1939.

She is the wife of Jonathan Kent and adoptive mother of Superman, also known as Clark Kent. Since they were unable to conceive a child of their own, when they found him as a baby inside of a strange rocket crashed to Earth they raised him as their son. Much later they learned he was the last surviving member of an alien race; when the planet Krypton was exploding, the boy's parents Jor-El and Lara chose to save him at the cost of their lives by sending him into space.

Ma and Pa Kent raised Clark on their farm in Smallville, Kansas. They were caring parents who instilled him with a deep sense of morality and American values. Eventually he began developing powers and they helped him create the alias Superboy. Although their boy has grown up and moved to the bustling city of Metropolis, he still frequently visits them. 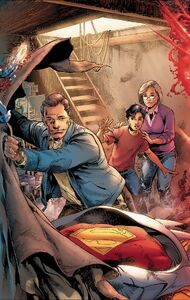