J'onn J'onzz, aka Martian Manhunter, is the major supporting character of the TV series, Justice League and Justice League Unlimited. He was a founding member of the Justice League. He was the only member who constantly lived in the Watchtower; in one instance, he had been in space for 2 years without going back to Earth. He was originally a resident of Mars and has many inhuman properties and abilities, which he uses to help the heroes of Earth.

He was voiced by Carl Lumbly.

J'onn is discovered in the episode Secret Origins. In it Astronaut, J. Allen Carter had went Mars as an Astronaut before re-landing on Earth as a national hero. What most did not know, was the "Carter" that returned was not the real one but an alien doppelganger, who had returned as a spy to sabotage Earth. While investigating Carter, the Justice League find that he secretly discovered a hidden Martian society, among them, J'onn was being held prisoner. He explains that the creatures they were encountering were not Martians but the Imperium, a hive-mind species of intergalactic invaders who had destroyed Mars but stranded themselves on it before the Earthling Astronaughts came. J'onn was the last of the Martians and quickly joins Superman and the others to help stop the threat.

The Imperium are eventually defeated but J'onn is left with no home or people. He adapts a capped humonoid form as a sign of kinship with his meta-human allies and decides to try to protect the people of Earth as his nearest neighbor planet so they never suffer the same fate as his home planet.

Over the course of the series, encounters the Sorceress Morgana. Morgana specializes in Enchantments and telepathy and uses J'onn telepathic eavesdropping against him to mesmerize him. She presents herself as his wife, My'ria'h. Morgana makes it clear if J'onn helps her recover a powerful magical artifact anything is possible, even restoration Mars, in presenting herself as My'ria'h, she eggs J'onn on to steal the artifact and turn it over to her afterwards. The ruse nearly works, even after J'onn realizes he is not really seeing My'ria'h he is too overcome at the prospect to turn down Morgana's proposal. J'onn destroys the artifact at the very end but the encounter is the first time J'onn is viably shaken, and would be for the rest of his time with the Justice League.

J'onn eventually loses of empathy with humans. His lose of empathy is partially due to his psychic powers being overwhelmed at one point and being unable to shut off hearing the surface thoughts of all humans around him, the utter selfishness inherent to most humans disgusts J'onn and he loses motivation to be part of the Justice League. J'onn eventually finds some humans utterly selflessly looking for a lost girl at great personal cost, re-kindling hope for humans. J'onn leaves the Justice League to search for the simple parts of humanity to surround himself with, trusting the League to protect humanity as a whole. By the end of the series, J'onn has met a human woman and started a relationship with her, but leaves to help when Darkseid, invades the Earth as a doomsday scenario threatens the world.

Though J'onn is initially a wide-eyed optimist, his time on Earth sours him to humans. Overcoming pure criticism in humanity he keeps himself focused on the small picture to prevent from being overwhelmed by the human animal's collective selfishness over how Martians acted towards each-other. His encounter with Morgana brings to the surface repressed depression at the lose of his entire race. Once his initial stoicism is broken he gains more and more of a cynical outlook.

J'onn possesses a vast array of superpowers that he uses to serve others: superhuman strength, speed, limited invulnerability, telepathy, and several others.

J'onn is not only able to fly, but is able to do so at speeds of the level of meta-humans. His superhuman strength makes him much stronger than other members of the Justice League, with the exceptions of Superman and Wonder Woman. Under normal circumstances, J'onn's strength is inferior to that of Superman's, but his strength could augmented by his phase-shifting and size-manipulation powers. Hence, he might actually be as strong as Superman, if not stronger, depending on the extent to which he uses his powers.

He is a shape-shifter and can assume the shape of most organisms, humanoids, and objects. He has shown himself able to increase his size significantly, but not to decrease it. He also uses telepathy in which he can read minds and project his thoughts. He is a powerful telepathic especially with physical contact as he is able to get into Kragger's mind by tearing apart his mental barrier. However, this resulted in Kragger being mentally impaired for the remainder of his life. He also rescues Green Lantern, Flash, and Superman from Dr. Destiny by entering into their dreams. He also has the ability to mentally shield people from being detected.

J'onn is also able to alter his density at the molecular level, which in practice allows him to become invisible, pass through solid objects (and vice versa), or become invulnerably solid. An increase in his density results in a blue aura that increases his strength and invulnerability on par with that of Superman. This also allows J'onn to fully recover after sustaining severe physical damage, such as being torn apart into two.

As the product of an advanced civilization, J'onn also possesses a wealth of scientific knowledge and technological expertise. After his long experience of war, he is a brilliant field medic, and his telepathic abilities make him a great counselor and empath. Finally, his long life gives him great wisdom and an aptitude for strategic thinking. Despite being over 1,000 years old he maintains the appearance of what appears to be a middle-aged man. 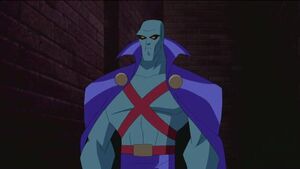 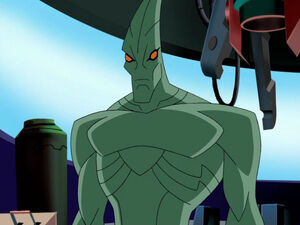 Retrieved from "https://hero.fandom.com/wiki/Martian_Manhunter_(DC_Animated_Universe)?oldid=1851017"
Community content is available under CC-BY-SA unless otherwise noted.