Protect Earth from Darkseid and his armies (ongoing).

The Martian Manhunter is a character in the DC Extended Universe, appearing as a supporting character in the 2013 film Man of Steel and the 2016 film Batman v Superman: Dawn of Justice, and as the overarching protagonist of the 2021 film Zack Snyder's Justice League.

Having gone by many names, the Martian Manhunter was an alien from Mars who travelled to Earth and, using his shape-shifting powers, became a Lieutenant General in the United States Army under the name Calvin Swanwick. During General Zod's invasion of Earth, General Swanwick allied himself with the Kryptonian hero Superman and helped save the world. He was later involved in suppressing Doomsday, a Kryptonian monster created by Lex Luthor using Zod's corpse, and although the creature was stopped, Superman lost his life.

Months later, the Manhunter posed as Superman's adoptive mother Martha Kent and attempted to console the Kryptonian's grieving partner Lois Lane. Superman himself was later resurrected by the Justice League to help repel the New God Steppenwolf's invasion. After Steppenwolf's defeat, Martian Manhunter approached Bruce Wayne in his true form and warned him that the New God's master Darkseid would retaliate.

Not much is known about the Martian Manhunter, but he is an alien from Mars who traveled to Earth at an unknown period of time. Before 2013, the Manhunter had taken the identity of "Calvin Swanwick", and became a general in the United States Army to protect Earth from terrorists and other threats.

In 2013, the Kryptonian Dru-Zod sent Earth a threatening message that he wanted a fellow alien named Kal-El, and if not given to him, Earth would be attacked. Kal-El came to the military and surrendered himself, and was taken into custody where the reporter Lois Lane spoke to him. After the interrogation, Kal-El was turned over to Zod's second-in-command, Faora-Ul, who also wanted Lois to come on their ship as well. Kal-El returned after fighting the Sword of Rao in Smallville, and told General Swanwick of his plan to stop the invasion by colliding the phantom drive into Zod's ship. Swanwick agreed to the plan, and it was successful despite the massive destruction caused in Metropolis.

After Zod was defeated, Swanwick ordered the military to track down Kal-El, now going by the name "Superman" with drones. Superman destroyed one of the drones in front of Swanwick's car, and explained that he wouldn't harm Earth since he was raised in Kansas. Swanwick made an alliance with Superman, who wanted to be left be on his own terms. After the incident that was called the "Black Zero Event", Swanwick was promoted to secretary of defense.

In 2015, Swanwick is greeted by Lois who wants to know the maker of the bullet used in Nairomi, and Calvin reluctantly agrees to help her. He informs Lois that the maker is from LexCorp, and later learns that Lex Luthor created a monster named "Doomsday" to kill Superman. Swanwick was ordered to shoot a missile at the creature, but he refused since it could cause Superman to be killed. The general reluctantly agreed to do so, but the creature survived and only became stronger while Superman was briefly subdued to the nuclear blast. Superman is helped by Batman and Wonder Woman to kill the creature, but dies in the process and is mourned by the world.

The Manhunter first appears in the guise of Martha Kent to speak with Lois, who was still grieving the loss of Superman along with the rest of the world. After speaking with Lois, he left her apartment and shapeshifted into his alien and into Swanwick, stating that the world needed Lois at the moment. It can assumed that the Manhunter continued his form as Swanwick when Darkseid's uncle, Steppenwolf led the invasion of Earth to fulfill his promise to his nephew. After the Justice League had Superman revived and defeated Steppenwolf, the Manhunter spoke to Bruce Wayne that Darkseid would retaliate for his uncle's failure to collect the Mother Boxes. He also told Bruce that since there were more heroes in the world, he was ready to step out and help since he saw Earth as one of his homes. 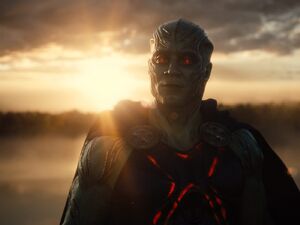