Investigating people who have been killed by the Sharks.

Have the beaches closed to keep people safe and kill the Shark (all succeeded).

Chief Martin Brody is the main protagonist of the novel Jaws by Peter Benchley, it's 1975 well-acclaimed blockbuster thriller adaptation of the same name and the 1978 sequel Jaws 2, a mentioned character in Jaws 3-D, and a posthumous character in Jaws: The Revenge. He is the police chief of Amity Island in Cape Cod, Massachusetts.

He was played by the late Roy Scheider in the first two films and played Frank Murphy on the 1983 action film Blue Thunder.

A girl named Chrissie Watkins leaves a party on Amity Island and goes skinny dipping. While swimming out near a buoy, she is seized by something from below; it thrashes her around and drags her down.

Chrissie is reported missing and her remains are later found on the beach by the Deputy of police chief Martin Brody. The medical examiner informs Brody that she was killed by a shark. Brody plans to close the beaches but is overruled by mayor Larry Vaughan, who fears that reports of a shark attack will ruin the summer tourist season, the town's primary source of income. The medical examiner consequently attributes the death to a boating accident. Brody reluctantly goes along with the explanation. The shark then kills a young boy swimming at the beach. His mother places a bounty on the shark, sparking an amateur shark-hunting frenzy and attracting the attention of local professional shark hunter Quint, who offers to kill the shark for $10,000. Marine biologist Matt Hooper examines Chrissie's remains and determines that she was killed by a shark, not a boat.

A large tiger shark is caught by fishermen, leading the townspeople to believe the problem is solved. Hooper asks to examine its stomach contents, but Vaughan refuses. That evening, Brody and Hooper secretly open the shark's stomach and discover that it does not contain human remains. They head out to sea to find the shark, but instead find the wreckage of a boat belonging to local fisherman Ben Gardner. Hooper explores the vessel underwater and discovers a sizable shark's tooth protruding from the damaged hull before he is startled by Gardner's corpse, causing him to drop the tooth. Without evidence, Vaughan refuses to close the beaches.

Many tourists arrive on the Fourth of July. A children's prank causes panic at the main beach while the shark enters a nearby estuary and kills a man. Brody's son Michael, who narrowly escapes the attack, goes into shock. Brody persuades Vaughan to hire Quint, and Quint reluctantly allows Hooper and Brody to join the hunt. The three set out to kill the shark aboard Quint's vessel, the Orca. Brody is given the task of laying a chum line but an enormous great white looms up behind the boat, and the trio watch it circle the Orca. Quint estimates its size as twenty-five feet in length, with a weight of over three tons. He harpoons it with a line attached to a flotation barrel, but the shark pulls the barrel underwater and disappears.

The men retire to the cabin, where Quint relates his experience with sharks as a survivor of the sinking of the USS Indianapolis. The shark returns, damages the hull and slips away. It reappears in the morning. Brody attempts to call the U.S. Coast Guard, but Quint destroys the radio. Quint harpoons two more barrels to the shark, and the men tie them both to the stern, but the shark drags the boat backwards, forcing water onto the deck and flooding the engine. Quint heads toward shore, hoping to draw it into shallow waters and suffocate it. In his obsession to kill the shark, Quint burns out the Orca's engine.

With the boat immobilized, the trio attempt a desperate approach: Hooper dons scuba gear and enters the ocean inside a shark proof cage, intending to stab the shark with a hypodermic spear filled with strychnine. The shark attacks the cage from behind, causing Hooper to drop the spear. When the shark becomes entangled in the wrecked cage, Hooper escapes and hides in the seabed. The shark then leaps onto the boat, crushing the transom. Quint slides down the deck and is killed by the shark. When the shark attacks again, Brody shoves a pressurized scuba tank into its mouth, then takes Quint's rifle and climbs the sinking Orca's mast. The shark, with the tank still in its mouth, begins swimming toward Brody. Brody shoots the tank, causing it to explode and blowing the shark to pieces. Hooper swims to the surface and they use the barrels to swim toward shore.

Four years after the events of Jaws, two amateur divers are photographing the wreck of the Orca, Quint's destroyed boat from which Martin was saved. They are suddenly attacked and devoured by a large great white shark, and during the attack, one of the divers' camera manages to take a photo of the shark's detailed profile.

A few days later, the shark enters Amity Island's coastal waters, killing a female water skier. The speedboat's female driver tries to defend herself by first throwing a gasoline tank at the shark (accidentally spilling some on herself) and then igniting the fuel with a flare gun. The fire ignites the gas tank and the speedboat explodes, killing the driver. The shark survives, but burned on the right side of its head.

In addition to these incidents, a dead killer whale is beached at a nearby lighthouse with large wounds all over its body which Police Chief Martin Brody (Roy Scheider) suggests were caused by a great white shark. Once again, Mayor Vaughn (Murray Hamilton) doesn't share Brody's belief that the town has another shark problem and warns him not to press the issue, afraid that it will cause mass hysteria. Later, Brody spots a section of a ruined speedboat bobbing in the surf just off the beach. When he goes to retrieve it, he encounters the burnt remains of the female speedboat driver.

Brody stops his 17-year-old son Mike (Mark Gruner) from going sailing, and finds him a summer job working at the beach. The following day, while Brody is in an observation tower, he sees a large shadow produced by a school of bluefish, which he mistakes for a shark. In his haste, Brody orders everyone out of the water and fires his gun, causing a panic. Later that evening, he receives the photo of the shark's eye, taken by one of the attacked divers. Brody shows it to Vaughn and his townsmen, but they refuse to accept the evidence put in front of them, being extremly relucant to close the tourist season. Len Peterson (Joseph Mascolo), who has built a new resort in Amity to attract people, has convinced the town council to fire Brody, with Mayor Vaughn being the only one to vote against dismissal. Deputy Hendricks (Jeffrey Kramer) is promoted to Brody's position.

The next morning, Mike sneaks out and goes sailing with his friends, but has to take his young brother Sean (Mark Gilpin) along to stop him telling his parents about Mike's trip. Later, they go past a group of divers led by Tom Andrews (Barry Coe). Tom encounters the shark minutes after entering the water to catch lobsters and escapes, but suffers an embolism due to rushing to the surface too fast. Tina (Ann Dusenberry) and Eddie (Gary Dubin) later encounter the shark when it smashes into their sailboat, devouring Eddie and leaving Tina terrified and alone.

Brody and his wife Ellen (Lorraine Gary) find Andrews being put into an ambulance, and Brody suspects that something must have scared him to make him come up so fast. Hendricks informs Brody that Mike has gone out sailing to the lighthouse with his friends, so Brody insists on taking the police patrol boat to rescue them, with Ellen and Hendricks both joining him. They find Tina's boat, with Tina hiding in the hull, who confirms Brody's suspicions about the shark in the area. Hendricks and Ellen take Tina ashore in a passing boat, while Brody continues to search for the teenagers using the police launch.

All seems well with the other teenagers until the shark appears. The shark then smashes into one of their sail boats, causing panic and their boats to collide with each other. Mike is knocked unconscious and is pulled out of the water just as the shark appears; two friends take him back to the shore for help. The rest of the teens remain floating on the wreckage of tangled boats, drifting out toward the open sea. A harbor patrol marine helicopter arrives and a line is rigged to tow the boats to shore, but before the pilot can tow them, the shark attacks the chopper causing it to capsize and sink. Sean also falls into the water, but he is quickly saved by Marge (Martha Swatek). As Marge tries to get back into the boat, her hands slip on the wet hull, and she falls back into the water. The shark approaches and devours Marge. Back at mainland, Tina is sent to the hospital, and Ellen berates Peterson for getting Brody fired and denying the shark's presence.

Brody finds Mike, who informs his father about the situation. Sean and his friends are drifting on the wreckage toward Cable Junction (a small rocky island housing an electrical relay station), with the open sea beyond it. Brody quickly finds the teenagers, but the shark attacks again, which causes Brody to run his boat aground on the rocks. Brody tries to tie a rope line, but snags an underwater power cable instead. Most of the teenagers are tossed into the water during the shark's next attack, and they swim to safety on Cable Junction, though the shark injures Lucy while Sean and Jackie are left marooned on one of the boats. Using an inflatable raft, Brody gets the shark's attention by pounding the power line with an oar (thus creating a rhythmic vibration under the water), and gets the shark to bite the power cable. The shark gets electrocuted, then sinks to the bottom of the sea. Brody collects Sean and Jackie and paddles over to Cable Junction, to await rescue with the other teenagers.

Due to Roy Scheider's fights on the set of Jaws 2 with director, Jeannot Szwarc, he then decided not to return to the more poorly recieved sequels, Jaws 3 and Jaws: The Revenge. Eventually, in The Revenge, they then revealed that during the films, he had died of a heart attack from the fear of the sharks which audiences took very negatively after he had killed two. 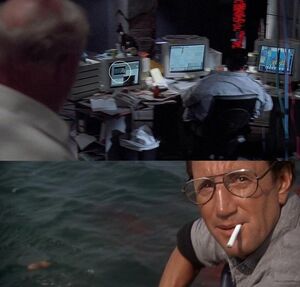 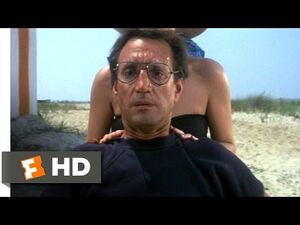 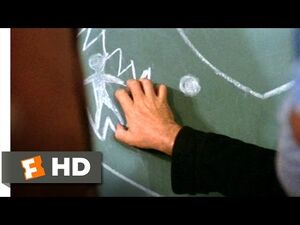 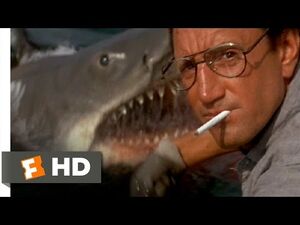 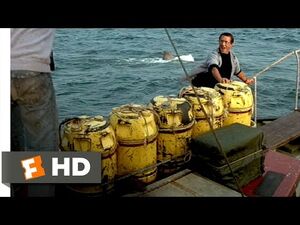 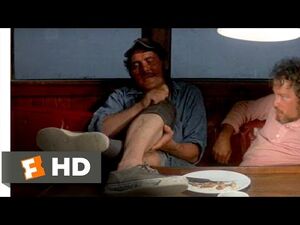 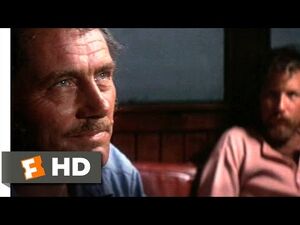 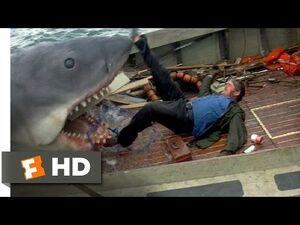 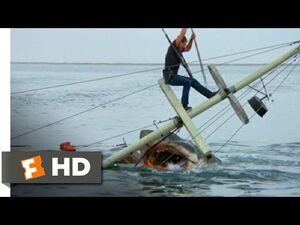 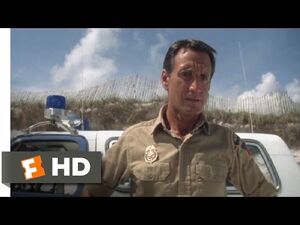 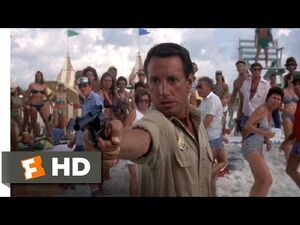 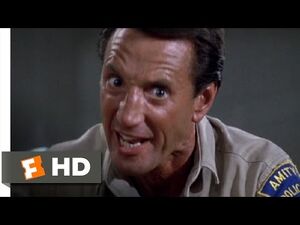 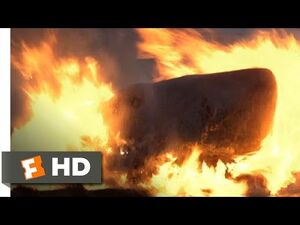