Kid Hero
Martin Prince is a major character from the TV series "The Simpsons".

He is Bart's classmate, and is Lisa's rival in intelligence. He is Nelson Muntz's favorite target for bullying. He is an academically brilliant teacher's pet, and is portrayed as a stereotypical nerd. Martin is a 4th grade student at Springfield Elementary School. He is usually shown as Bart's friend due to the fact that he is occasionally seen with Bart, along with Nelson, Milhouse, and other kids. 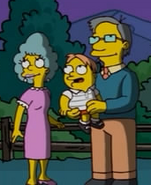 Younger Martin with his parents.