Being with Peter Parker.

A Daily Bugle reporter, she is a friend and love interest of Peter Parker, and is aware of his secret identity as Spider-Man. Part of her story involves an investigation into who is behind the events happening in New York City, which culminates in her breaking into Norman Osborn's penthouse.

She is voiced by Laura Bailey, who also voiced Nadine Ross in the Uncharted series, Supergirl in Injustice 2, Abigail Walker in the inFamous series, Serana in The Elder Scrolls V: Skyrim, Rayne in the titular BloodRayne series, Helena Harper in Resident Evil 6, Kait Diaz in the Gears of War series, Catwoman in Telltale's Batman, Lust in 2003s Full Metal Alchemist, Polina Petrova in Call of Duty: Vanguard, Chun-Li in the Street Fighter series, and Jaina Proudmoore in World of Warcraft.

Mary Jane was born in Montoursville, Pennsylvania around 1995. While not much about her early life is discussed, it seems that she lived alone with her father, with whom she had a difficult relationship. While in middle school, Mary Jane became best friends with Peter Parker and Harry Osborn, a friendship which would last into their adulthood. While it is unclear when, she learned about Peter's identity as Spider-Man, and would provide aid to him, including medical help, when he needed it. She started dating Peter in their senior year of college, and they dated for about two years. Mary Jane eventually broke up with Peter due to him being overprotective. At some point before or after their break-up, Mary Jane became an investigative journalist for the Daily Bugle newspaper.

Mary Jane and Peter have been apart for six months when Marvel's Spider-Man begins. They first run into one another during the mission Don't Touch the Art, where players get to play as Mary Jane for the first time. Mary Jane helps Peter with his investigations, though they stay professional; it is only later that she reveals the reason they broke up was because he was overprotective of her.

As the story unfolds, Mary Jane finally gets fed up with how protective he is when she fails to get information from Charles Standish due to Spider-Man's interference. As such, she does not tell him about Martin Li's plans regarding Grand Central Station and goes there alone. She is caught up in Li's taking over of the station and held hostage, but is eventually able to defuse the Devil's Breath bomb.

The experience shakes her, and she cuts off contact with Peter for a time. When they finally do reconnect, it is after Doctor Octopus has freed the prisoners within Ryker's Prison and The Raft, some of whom have set fire to the F.E.A.S.T. shelter downtown after ransacking it. Spider-Man arrives to save Aunt May and Miles Morales, but in turn has to be saved himself by Miles and Mary Jane. With such a close call, the trio decide to take on the new problems of the city together, with Mary Jane fully a partner.

The new role comes most to fruition when she infiltrates the penthouse of Norman Osborn, coming face-to-face with Sable International and Silver Sable herself. So dangerous is the mission that she is forced to leap off the high-rise balcony in order to escape them, only to be rescued by Spider-Man.

After Spider-Man is severely beaten by Doctor Octopus, it is Mary Jane that gives him the idea to use his scientific knowledge in order to defeat him. While the plan ultimately succeeds and the antiserum is recovered, she and Peter are unable to save Aunt May from Devil's Breath. Mary Jane stands at Peter's side during May's funeral.

Three months after the situation, Mary Jane is made an associate editor at the Daily Bugle. She goes to dinner with Peter and lets him know the news, then suggests he move in with her for a while until his new place is ready. In her closing scene, she and Peter share a long kiss.

Sometime after, Mary Jane alerts Peter to a break-in at the MOCA art museum.

Mary Jane is hardworking and headstrong. Like Peter, she is willing to put her life on the line for what she believes in, showing courage and poise against impossible odds. She is also very capable of taking care of herself as shown when she infiltrates a Sable International outpost without being seen, or when she manages to break into Norman Osborn's penthouse, even evading Silver Sable herself.

As a journalist, she always strives to reach the truth behind the story, even if that means resorting to dishonest means to get it. That being said, Mary Jane does not resort to malicious behavior, merely lying to get around more ruthless targets. 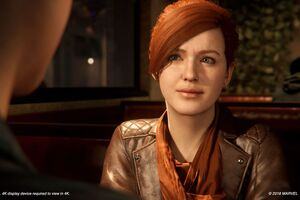 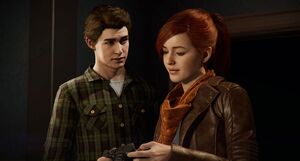 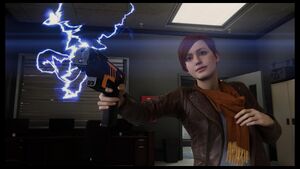 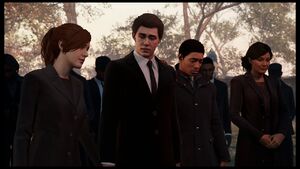 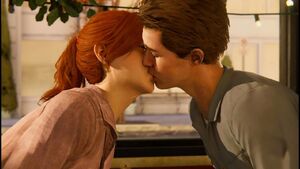 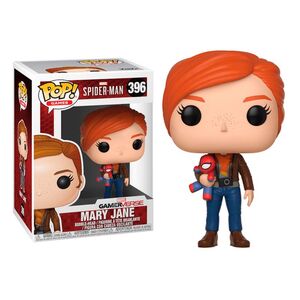