Masamune Date, also known Azure Dragon, is one of the main characters of the Sengoku Basara video game series. He is a cocky, ambitious warlord whose mannerism is very close to Dante of Devil May Cry fame. He also tends to speak in a mixture of English and Japanese. Usually wields a single katana, but he can store and fight with six swords at once (three in each hand, held between the fingers). He is depicted in a rivalry with Yukimura Sanada. His element is lightning.

In the anime is portrayed as the energetic and fearless young ruler of the Date Clan. He is known by the nickname Dokuganryū (One-Eyed Dragon). Medium-long brown hair, a black eye-patch, an uncommon and original blue suit and a classic helmet with a golden crescent moon at its top is how Masamune has been drawn in the anime, respecting each detail from the game. Another curious thing to mention is his horse: it resembles a motorcycle, because it's equipped with real modern handlebars coming out from the mane and an exhaust pipe on the back. Whenever he travels on horseback, he rides leaning back with his arms crossed.

He tends to speak a mixture of English and Japanese and the way he and his men are shown seems to resemble a Yakuza Clan (due to some hairstyles, way of talking and other details). Date Masamune is presented as a cocky and ambitious warlord, usually wielding a single Katana, though when fighting seriously he can use up to six swords at once (three in each hand, held between the fingers). His six swords gain the nickname "Dragon's claws".

While energetic and optimistic on the battlefield, outside of it he is rather quiet, mild, and thoughtful. He discusses plans and difficulties openly with his men and often weighs the counsel of his second in command, Kojūrō Katakura, before making major decisions. This personality contrast adds to his character's appeal, preventing the forming of a single, unchanging personality. In addition, his loyalty to his men is unmistakable; he has shown more than once to deeply care for all of them, especially for his right hand Kojūrō.

Despite his rivalry with the young Yukimura Sanada, the two have a deep respect for each other and will also form an alliance in order to take down the Devil King Nobunaga Oda.

In Sengoku Basara 3, he was enraged after he and Katakura Kojūrō were defeated by Ishida Mitsunari, a loyal retainer of Toyotomi Hideyoshi in Odawara Castle.

So he, along with Katakura Kojūrō, went after Mitsunari Ishida to defeat him in order to return his pride. Later, Date Masamune made a decision to forge an alliance with Ieyasu Tokugawa and join the battle of Sekigahara to fight Mitsunari. He battles Mitsunari, but not out of revenge, as he states that he was just a stepping stone for him. He defeats Mitsunari but doesn't kill him, remarking that his eyes resemble his before leaving.

In his second story, he heads straight to Osaka and defeats Mitsunari in his first stage. He learns that Yukimura went to Yoshihiro and decides to go there too. After meeting Yoshihiro, he heads to Osaka again to battle Yukimura. After a fierce battle, it end.

Masamune is one of the few characters to have an alternate mode- his regular mode and his 6-Sword mode.

In his regular mode, Masamune uses only one of his swords for his regular attack string. His S-String comprises of the usual slashes and is comparable to most other characters in terms of attack speed and range.

In his 6-sword mode, Masamune uses all six swords. This mode is activated by equipping his personal item, using his Basara Attack, using War Dance or automatically in certain stages in the story. Masamune will return to his regular mode when hit, after certain amount of time has passed, or when using most of his skills. While in this mode, his S-String will deal more damage in addition to being faster and longer (range-wise) than his regular S-String. His S-String also covers more area, than his regular one. However, while in this mode, Masamune cannot guard or evade, making it risky to use in some situations. Prior to Sengoku Basara 3, unless his personal item is equipped, this mode would be cancelled once Masamune gets hit or using any skills other than War Dance. Also, in Sengoku Basara 3, Masamune gets a new regular air attack and his skills get upgraded while in this mode.

His personal item lets him stay in his 6-swords mode for the entire battle. 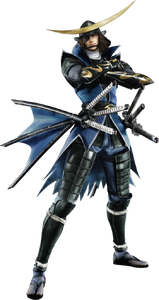 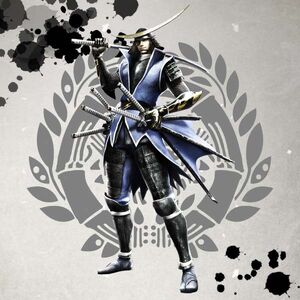 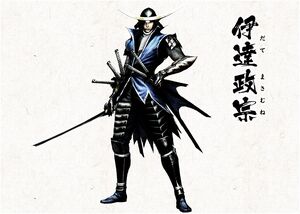 Retrieved from "https://hero.fandom.com/wiki/Masamune_Date_(Sengoku_BASARA)?oldid=2133728"
Community content is available under CC-BY-SA unless otherwise noted.