In the Fate/Grand Order anime adaptions, Mash is voiced by Rie Takahashi (with Risa Taneda as a stand-in) in Japanese and Erica Mendez in English. Takahashi has also voiced Megumin in KonoSuba, Emilia in Re:Zero, and Mirai Asahina in Witchy PreCure!. Mendez has also voiced Gon Freecss in the 2011 Hunter x Hunter series, Megumin in KonoSuba, Diane in The Seven Deadly Sins, Raphtalia in The Rising of the Shield Hero, Sailor Uranus in Sailor Moon, Yuuki Konno in Sword Art Online, Ryūko Matoi in Kill la Kill, and Atsuko Kagari in Little Witch Academia.

Mash has pale pink hair and lavender eyes. In her casual outfit, Mash wears rectangular frame glasses, a grey hoodie over a black shirt over a white collar shirt, a red tie, a black skirt and tights and brown shoes. In her Demi-Servant outfit Mash wears black armour with a hole exposing her stomach, black gauntlets and boots, a garter on her right thigh, a large cross-shaped shield and she doesn't wear her glasses. 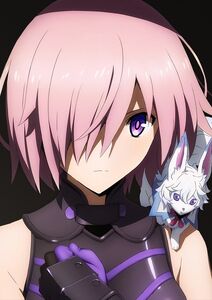 Close up of Mash and Fou in Fate/Grand Order - Absolute Demonic Front: Babylonia. 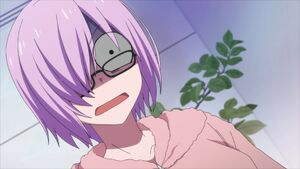