Master and Leader of the Skylanders

Guide of the Earth Portal Masters

Help the Portal Master on Earth and the Skylanders defeat Kaos, the Arkeyans, and the Darkness.

Master Eon is a Portal Master and an NPC who is one of the main protagonists of the Skylanders franchise. He serves as the posthumous tritagonist of Spyro's Adventure, Giants, and Superchargers, a supporting protagonist in Swap Force, Trap Team, and Imaginators, and the deuteragonist of Skylanders Academy. He is also the uncle of Aurora.

He was voiced by Daniel Hagen in the games, and by Chris Diamantopoulos in Skylanders Academy.

As a humble servant boy, Eon started his life polishing pans in the kitchen of the Portal Master, Nattybumpo. When he was eight years old, it was realized that Eon was no ordinary boy when he accidentally activated Nattybumpo's portal and teleported him into the middle of The Dirt Seas.

Over the years, Eon became the greatest among the Portal Masters. He recruited many of the Skylanders to be the legendary champions of their world they are today, seeing their potential and unique abilities that are capable of fighting the evil in Skylands. He led the Skylanders to protect the Core of Light and their world from the forces of darkness. Eventually, Eon became the last good Portal Master and grew weaker with age as time passed, and he knew that it was only a matter of time before The Darkness would return one day. 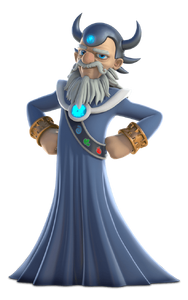 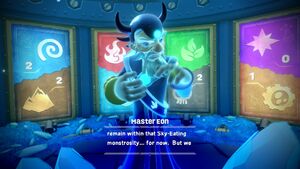