To help the Xiaolin Dragons protect the world from evil threats.

Master Monk Guan is the supporting character of Xiaolin Showdown. He is an ally of the Xiaolin Monks and was once best friends with Grand Master Dashi and Chase Young.

He is voiced by Jeff Bennett.

Guan is generally a mild-mannered mentor figure and a very kind, thoughtful and considerate person. However, in spite of his status as a powerful warrior, he relied solely on his spear when he first appeared and had serious doubts in his skills when he lost it to the point he sold out Dojo to Chase Young to get it back. Eventually, Guan makes up for his mistake by later rescuing Dojo, and regains his self-confidence, thanking the Xiaolin Monks for their support.

Master Monk Guan is a tall, muscular, yet attractive man with a bald head. His eyes are usually closed with a rectangle-shaped face. Despite being the same age as Chase Young, he does not appear to have aged in fifteen hundred years.

Master Monk Guan was a legendary T'ai Chi master who had traveled the world, and had defeated many opponents using only his famous Spear of Guan.

Guan met the Xiaolin Dragons when a new Shen Gong Wu revealed itself. Later, he took Dojo Kanojo Cho to the lair of Chase Young, the greatest Heylin Warrior of all time, in exchange for the Spear. When questioned by the Xiaolin Dragons, Guan explained that despite being a world-accomplished warrior, he was deeply dependent on his spear and had serious doubts in his abilities when he lost it. Omi looked up to him, and he showed them the way to Chase Young's palace so they could save Dojo. When the Dragons were at Chase's mercy, Guan appears to challenge the renegade warrior to an old-fashioned Showdown, wagering his own free will in exchange for the Xiaolin Monks and Dojo's safety. Despite Chase's trick arena and the power of his true form, Guan was able to defeat him using the powerful Repel the Beast technique. Afterwards, Guan regained his confidence, as he gave Omi the Spear of Guan, saying that he will no longer need it, and departs.

In a later episode, the young monks are sent to Guan's temple for combat training to fight against Hannibal Roy Bean. Unknown to the other warriors, he makes a master plan with Raimundo where he would fake harshness and make Raimundo "quit" so Bean would go to Raimundo and trick him out of the treasure of the blind swordsman. Guan was incredibly tough to them during the training session and bullies Raimundo Pedrosa into leaving the temple, where the Brazilian monk then allies himself with Hannibal Bean. After Raimundo threw the Xiaolin Showdown against Omi and betrayed Hannibal Bean, Guan revealed that he staged his entire feud with Raimundo to deceive Bean. He then gave Raimundo the Spear of Guan #384 as a reward for his acting, and reveals a large building filled with numbered Spears of Guan.

In "Time After Time: Part 2" when Omi stopped Hannibal Bean from turning Chase Young to evil, Hannibal turned Guan evil instead, giving him a monster form that resembles a scorpion-like insect or even a crustacean. Also, the beads on his kimono had become skulls. As he assisted Grand Master Dashi in banishing Wuya into the Puzzle Box, he is over 1500 years old. However, there is no explanation given in the series for how this is possible, as he did not drink the Lao Mang Long soup like Chase. In their younger days before Hannibal Bean's influence, Guan was close friends with Chase Young, and though he was a Xiaolin warrior then. 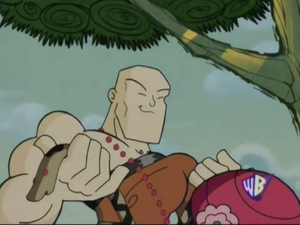 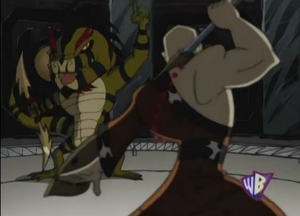 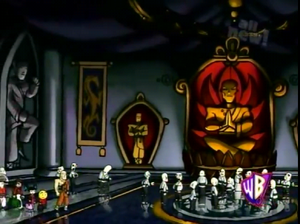 Guan takes the Xiaolin Monks into his temple. 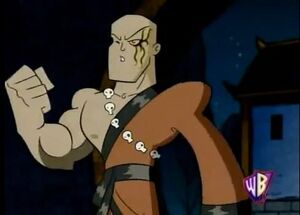 Retrieved from "https://hero.fandom.com/wiki/Master_Monk_Guan?oldid=2115892"
Community content is available under CC-BY-SA unless otherwise noted.