Images of Mater from the Cars franchise. 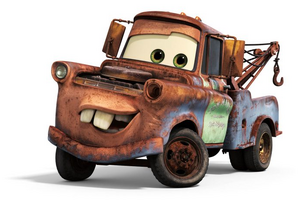 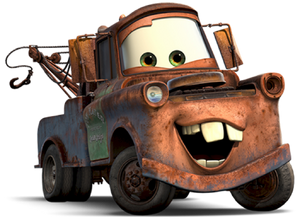 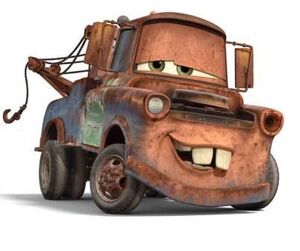 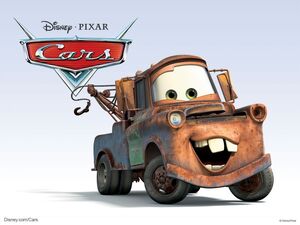 (Sheriff: MATER! What did I tell you about talkin' to the accused?!) "To not to."

"I'd have to trade to lug nuts for somethin' like that!"

Mater and Doc laugh as McQueen falls into a cactus patch.

Mater and his friends watching McQueen scrap off the bumpy road.

Mater ordered by Sheriff to watch over McQueen for the night. He tells him to keep an eye on him.

Mater "keeping an eye" on McQueen.

Mater in his youth

Mater, Doc and Company appearing at McQueen's race.
Add a photo to this gallery 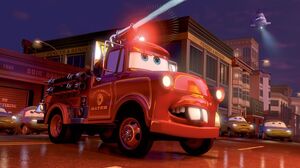 Mater as a fire truck 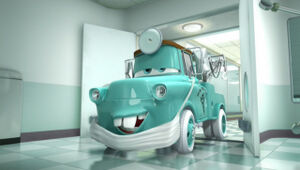 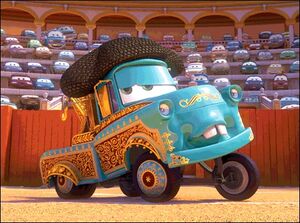 Mater as a matador 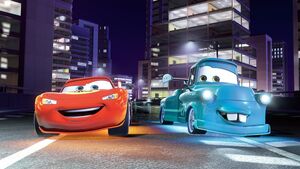 Mater as a drifter 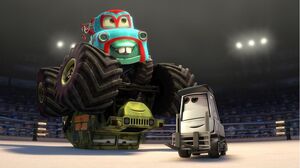 Mater as a monster truck 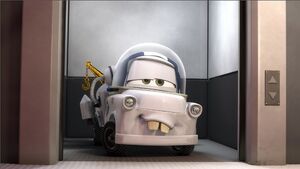 Mater as an astronaut 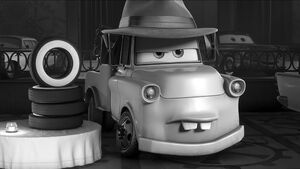 Mater as a private detective 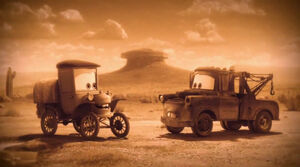 NOTE: The limit is for 20 pictures only.

"Mater. Tow Mater. That's who is here to help you."

Mater talking to Otis while towing him to Radiator Springs.

Mater telling Otis that McQueen has not returned from racing season yet.

Mater happy and excited to see McQueen has returned home from his racing season.

Mater and McQueen doing a handshake.

Mater and McQueen kicking their back tires.

Mater and Lightning finishing their handshake.

Mater amazed to see the Piston Cup renamed in honor of Doc Hudson.

Mater comforting a saddened McQueen by saying Doc would be proud of him.

Mater and McQueen about to spend time together.

Mater and McQueen on train tracks with no tires on.

Mater honking his horn to tip the tractor.

Mater and McQueen before being blown away by the tractor.

Mater and McQueen after having spent the day together.

Mater sad to hear that McQueen plans to go on a date with Sally.

Although he allowed McQueen to go on his date, Mater feels lonely.

"My name is Mater and I'll be your waiter."

Mater denying having to dress up as a waiter in order to spend time with McQueen.

Mater after McQueen and Sally order their drinks which is McQueen's usual drink, but doesn't know what it is.

Mater shocked to hear how Axlerod invited McQueen to join the World Grand Prix, only to be declined.

"He can beat you anywhere! Any time! Any track!"

Mater calling the show as Francesco Bernoulli begins insulting him before McQueen calls the show.

Mater about to try a drink out of curiosity.

Mater not liking the drink before he puts it back into the cup.

Mater being asked by McQueen to see the world with him, which Mater happily accepts.

Mater as a member of Team McQueen.

On the plane, Mater and McQueen stay up late to watch some Japanese game shows.

Mater and McQueen laughing as they watch TV together.

Mater and McQueen laughing when they see an advertisement for Lightning McQueen vacuum cleaners.

Mater and McQueen amazed by the sights they are seeing in Tokyo.

Mater and McQueen in a store selling Lightning McQueen merchandise.

Mater and McQueen watching a sumo wrestling match together.

Mater surrounded by the press.

Mater and McQueen arriving at the grand opening party of the World Grand Prix.

Mater and McQueen fascinated with the party.

Mater tapping on the glass to get a Zen Master's attention.

"You done good! You got all the leaves!"

Mater complimenting the Zen Master, mistaking him for raking leaves.

When McQueen meets with him, Mater is told by his friend that they are not in Radiator Springs.

Mater listening to McQueen describe how the world is different from Radiator Springs.

Mater being asked by McQueen to try to have a different kind of behavior.

Mater becoming confident that he can be different.

When Mater spots Francesco Bernoulli, he goes over to meet him despite McQueen's protests.

Mater offering to get a drink for McQueen.

Mater asking for some money so he can buy a drink.

Mater becoming excited when McQueen tells him that all the party's drinks are free.

Mater whistling as he gets some drinks.

Mater going up to a food stand where he takes an interest in wasabi, mistaking it for ice cream.

Mater asking the chef to put more wasabi on his plate.

When served a huge amount of wasabi, Mater goes to eat it.

Mater drinking from a fountain to get rid of the taste of wasabi.

"Whatever you do, do not eat the free pistachio ice cream!"

Mater being blamed for leaking oil.

A confused Mater insists to McQueen that he never does leak oil.

Mater being ordered by McQueen to go fix himself up.

Mater rushing to go to the bathroom.

Mater amazed to the inside of a bathroom stall.

Mater in the bathroom stall.

Mater being tortured by the bathroom stall's mechanics.

Mater having exited the bathroom stall, leaving him traumatized.

Mater being ordered by two Lemons, Grem and Acer, to leave, as they unaware Redline put a secret device on Mater.

Mater having unknowingly answered a coded question from Holley, leaving her to think he's a spy.

Mater telling Holley he'll be at the WGP race where she sets a rendezvous with him.

Mater telling his friends he set up a romantic date.

Mater gazing lovingly at Holley as he watches her go.

Mater during the first race of the World Grand Prix.

Mater guiding McQueen through a headset during the race.

Mater receiving a communication from Holley who warns him to get out of the pits.

Mater observing himself in a mirror.

As Holley communicates with him, Mater unknowingly gives McQueen wrong racing advice during the race.

After secret agent Finn McMissile defeats two Lemons, Holley tells a confused Mater that they will be in touch soon.

At the airport, Mater is approached by a police officer who is Finn McMissile in disguise.

Mater being led away by Finn McMissile.

Mater meeting Finn McMissile when he removes his disguise.

Mater starting to talk about some karate moves.

Mater escaping the airport with McMissile.

Mater towing McMissile as they're pursued by Grem and Acer.

"Is everything okay back there?"

Mater driving as Acer tries to block his path.

"I knew I shoulda done carry-on!"

Mater overjoyed when he sees Holley inside of Siddeley.

Mater asking Holley if she's ready for a date, which shocks her.

"That's a no-quit attitude right there!"

The device containing a photo in Mater's undercarriage.

Mater after Holley pulled the device off of him.

Mater introducing Finn and Holley to each other.

"I never did get your name."

"Well, that's one of the worst engines ever made."

After describing the engine, Mater tells Finn and Holley that he doesn't know the owner of the engine.

Mater trying to flirt with Holley.

Mater pointing to the agents that the engine's owner used rare parts.

Mater shocked and confused when he realizes Finn and Holley think he's a spy.

Mater reluctant to help the agents as he's still sad over his fight with McQueen.

After relenting, Mater tries to tell the agents he's just a tow truck, but they don't believe him.

"Man, there are some bargains here!"

"Well, when a lemon needs part, there ain't nothin' better than that."

Mater describing what "lemon" cars are.

Mater upon hearing the Lemons are having a meeting at the next WGP race, Porto Corsa, Italy.

Mater waiting for Holley to lure the Lemons' tow truck to him.

Mater worried about messing things up while he's in disguise.

Mater feeling hurt by Finn's compliment of his behavior.

Mater witnessing the arrival of the head of the Hugo family, Victor Hugo.

Mater awed by the lavish style of the casino.

Mater reading his computer's descriptions of a Hugo.

Mater stopping himself from blowing his cover.

Mater shocked to be surrounded by dangerous criminals.

Mater listening to the Lemons' mysterious mastermind give a speech on how the Lemons felt rejected by the world.

Mater horrified to discover that the Lemons are behind sabotaging the World Grand Prix.

Mater shocked to hear Miles Axlerod ban the usage of Allinol in the last race.

Mater trying to leave the meeting after receiving a communication from Holley.

Mater suddenly noticing McQueen being given a television interview.

Mater listening to a reporter asking McQueen what fuel he'll use in the final race.

Mater shocked to hear McQueen say he'll use Allinol in the last race.

Mater becoming moved when McQueen reveals how guilty he feels in their fight earlier, making Mater feel the same.

After being exposed, Mater finds himself surrounded by armed Lemons.

Mater escaping by flying on a paraglider.

Mater spotting McQueen being interviewed in the distance.

Mater trying to get McQueen's attention.

Mater seeing McQueen surrounded by the press as he tries to call for him.

Mater anxiously trying to get to McQueen.

Mater behind some cars as he tries to warn McQueen of the Lemons who are planning to kill him.

Mater ends up being captured by the Lemons before he can warn McQueen.

Mater being thrown in the back of a transporter.

Mater having a dream where he see flashbacks of how people made fun of him for his silliness.

Mater realizing how his silliness made him being cruelly made fun of by others.

Mater sadly realizing how his silliness strained his friendship with McQueen.

After his dream, Mater wakes up to find himself tied inside Big Bentley.

Mater being told by Finn that they are in London.

Mater threatened to being crushed by Big Ben's gears.

Mater blaming himself for the situation he's in now.

Mater trying to be consoled by Finn who tells him he was only commenting him on being a good spy.

Having enough with the agents' cluelessness, Mater snaps and confesses he is not a spy.

When he calms down, Mater explains he has been trying to tell the agents who he was the whole time.

"I really am just a tow truck."

Mater depressed, thinking McQueen is dead and blames himself for his best friend's death.

Mater hearing McQueen is still alive as Grem and Acer prepare to use the EMP emitter on McQueen.

Mater and his friends watching the remaining Lemons retreat, only to get arrested by the British Military.

Mater still keeping Axlerod cornered in order to force him into deactivating the bomb. 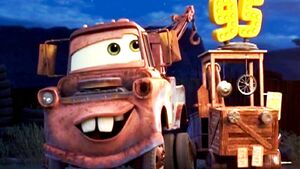 Mater building a model of him with junk

Mater talking to Rust and Dusty.
Add a photo to this gallery
Retrieved from "https://hero.fandom.com/wiki/Mater/Gallery?oldid=2149342"
Community content is available under CC-BY-SA unless otherwise noted.