Mrs. Flanders and Mommy (by Rod and Todd)

Spending time with her family (formerly)

Maude Flanders was the beautiful late wife of Ned Flanders, and the mother of Rod and Todd from The Simpsons.

Maude was a devout Christian who once attended a Bible camp to learn how to be more judgmental. She campaigned strongly against Itchy and Scratchy with Marge and was often partnered with Helen Lovejoy as they protest against the "evils" in Springfield. She died by falling off a grandstand, after being hit with several shirts from a t-shirt cannon by Homer at the Springfield Speedway.

She was voiced by Maggie Roswell, and later by Marcia Mitzman Gaven.

Although she spent much of her free time in prayer and reading the Bible, Maude was known to let her hair (and her neckline) down for the occasional dinner party at the home of her neighbors, the Simpsons.

Homer and Moe both found her attractive. Moe made anonymous phone calls to her and Homer once ogled Maude's low-cut dress at a dinner party, which ended up with him and Marge going to marriage camp.

In "Alone Again, Natura-Diddily", Maude died after being knocked off a grandstand by a shirt cannon at the Springfield Speedway, because Homer had made the Fan-demonium girls shoot right directly at him all at once. When this happened, Homer ducked down to pick up a bobby pin, causing Maude to get hit as she was returning to her seat while picking up snacks to give Ned and his boys, knocking her over the edge of the stadium. According to Homer, he had parked in the ambulance zone, preventing any quick resuscitation.

Her death crushed Ned and their sons, Todd and Rod, who, although used to some measure of hardship (their house getting destroyed) assumed they would always be together (The actual reason her character was killed off was due to a pay dispute between the actress who voiced her character and the show's producers).

Apparently, Homer fell in her grave, which Ned mentioned. Reverend Lovejoy eulogized her as follows: "In many ways, Maude Flanders was a supporting player in our lives. She didn't grab our attention with memorable catchphrases, or comical accents. But, whether you noticed her or not, Maude was always there ... and we thought she always would be."

After her death, the grieving Ned Flanders and the Simpsons saw in her sketchbook a series of drawings that outlined a plan for a Christian-themed amusement park named "Praiseland." Realizing this park to be her final dream, Ned acquired the defunct amusement park "Storytime Village" from Colonel Antoine "Tex" O'Hara ("The Rich Texan") and, with the assistance of Homer and other townspeople, built and opened Praiseland. He memorialized Maude there with a statue of her, and placed on its base a plaque bearing the phrase "She taught us the joy of shame and the shame of joy."

Praiseland sold Maude memorial items such as masks. Praiseland gained popularity among the residents of Springfield when they erroneously attributed to the statue of Maude the performance of miracles providing religious experiences. The religious experiences were actually hallucinations, caused by gas that was leaking from a gas line near the base of the statue (it is revealed that Springfield natural gas is actually deadlier and more poisonous in area with good ventilation). Feeling that profiting off the memory of his dead wife was wrong, and even more so after candles near the gas leak nearly caused an explosion, Ned closed down Praiseland. Though the episode aired in February 2000, the events appeared to take place before the winter meaning the events probably took place before Winter 1999 and 2000.

Maude will eventually return on the episode "Bart Simpson Helps 2 People From Getting Dead - Part I: The Simpson Boy Who Saved Maude Back Into Life". 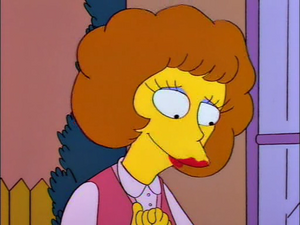 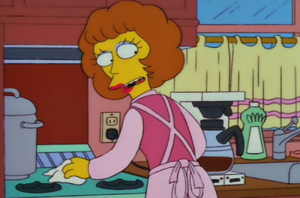 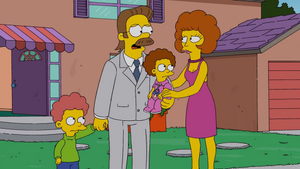 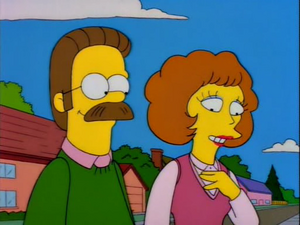 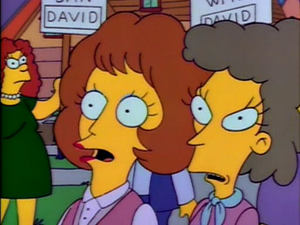 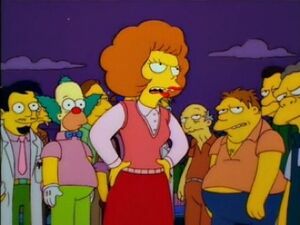 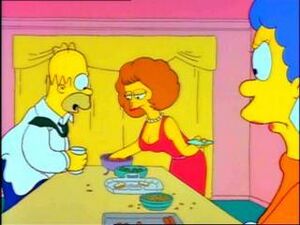 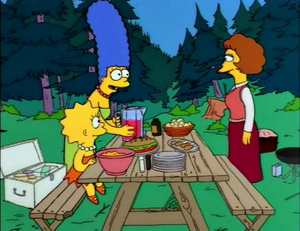 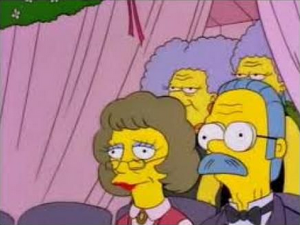 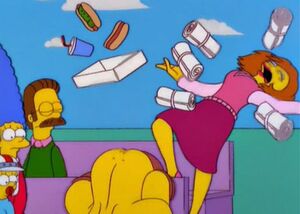 Maude's ghost
Add a photo to this gallery
Retrieved from "https://hero.fandom.com/wiki/Maude_Flanders?oldid=1921415"
Community content is available under CC-BY-SA unless otherwise noted.