To assistant King Julien in anyway

He is voiced by Cedric the Entertainer in the films, Kevin Michael Richardson in the television series, and John Cothran, Jr. in the video game.

Maurice is King Julien's adviser - although Julien seldom listens to him - and often shows skepticism of his ruler's mad plans. He has a long squirrel-like bushy tail. He lived in a tribe of other lemurs and witnessed newcomers to their home: a quartet of zoo animals. Maurice was suspicious of Alex, a lion, thinking him to be potentially dangerous. Maurice expressed this concern during a meeting of the lemurs and jungle animals, but was ignored by Julien. The next day, Maurice took part in the festival honoring the newcomers. During the festival, his suspicions about Alex become confirmed as Alex starts to give into his natural predatory instincts, and shortly after explained the trouble with having a lion around. He knew that Alex would need to eat meat, and felt that Alex should leave and go to the carnivore side of the island.

Shortly after, Maurice witnessed Gloria, Melman, and Marty working with a group of penguins to fight off the fossa that were attacking the lemur tribe. Maurice had to admit that King Julien's plan had worked and that fossa would no longer be of any worry. Maurice saw the newcomers out when they decided to leave and was obligated to wave King Julien's arm for him, as the king was tired of waving it. 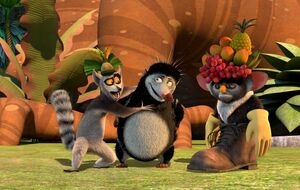 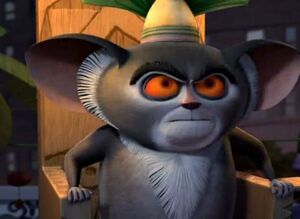