Max is Prince Eric's loyal Old English Sheepdog in Disney's 1989 film The Little Mermaid. He is voiced by Frank Welker.

Max is first seen aboard Prince Eric's ship in the opening scene. He is still there when Ariel spies on Prince Eric's birthday party. While prancing around, Max catches Ariel's scent and tracks her down at her hiding place. Ariel gets scared and hides, but then glances back in curiosity and comes face to face with a panting Max. Immediately taking a liking to Ariel, Max licks her cheek affectionately before being called away by Eric. When Ariel comments on how Eric is very handsome shortly afterward, Scuttle gets confused, thinking she's talking about Max and says, "I dunno, he looks kinda hairy and slobbery to me."

Eric is soon presented with a birthday gift of a large statue portraying him in fancy attire and a heroic pose, but Eric subtly shows dislike for the portrayal, and Max openly growls at it in extreme disapproval. When a storm hits and lightning sets the ship ablaze, everyone on board manage to escape except Max, who is left aboard, trapped by the fire. Eric goes back to the ship and saves his dog, risking his own life. Max later finds his master on shore after the shipwreck, licking his face happily. He is also able to smell Ariel behind some nearby rocks and although he tries to bark to get Eric and Grimsby's attention toward her, they ignore him.

Later, Eric is walking Max out on the beach. Max smells the now human Ariel further on down the beach and excitedly runs away from Eric, prompting Eric to follow the dog. He arrives and playfully chases a frightened Ariel up a rock, joyfully licking her face once more. Ariel wipes her cheek and grins at Max, realizing the dog means her no harm. When Eric arrives, Max gets frusturated when his master doesn't realize that Ariel is the same girl who saved his life.

As Eric is about to marry Vanessa (Ursula's human alter-ego), Max immediately realizes Vanessa's evilness, presumably able to smell the difference and growls at her as she passes by. Vanessa sharply kicks his face with the point of her high-heeled shoe to keep him quiet. Before the vows can be read, Scuttle leads a flock of bluebirds, amongst other animals, against Vanessa flustering and humiliating her so much that her hands are full. Max starts barking and jumping around wanting to add to the confusion, eventually breaking his leash and running up behind the bedraggled bride and biting her bottom in revenge.

Scuttle breaks her necklace off while she screams and strains away from Max and the shell containing Ariel's voice breaks, freeing the voice, which is restored to Ariel, who has just arrived. Max then excitedly runs over to Ariel, leading Eric to her. Max is last seen at Eric and Ariel's wedding, where he happily licks both the bride and the groom in a congratulatory mood.

Max plays a small role in the sequel. He is seen at the beginning on board Eric's ship again; when Ariel takes him for a walk near the wall dividing the kingdom from the ocean, and at the end when he comes to help Eric rescue Melody, and later partakes in the swimming party, knocking Grimsby into the ocean while jumping in himself.

The Little Mermaid: The Series

Max makes cameo appearances whenever Eric and his ship do, like in the episodes "Thingamajigger", "Ariel's Treasures", and "Scuttle". 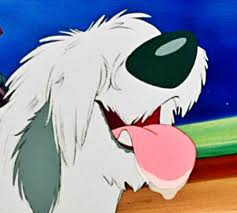 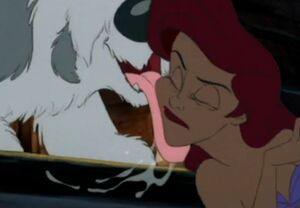 Max gives Ariel a big slobbery lick on the cheek. 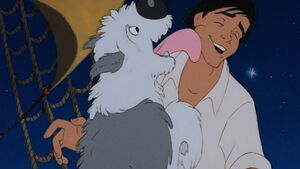 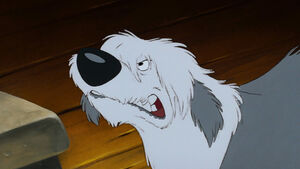 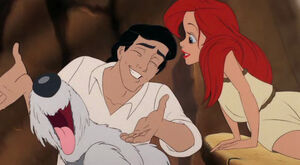 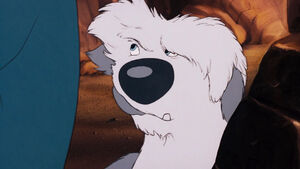 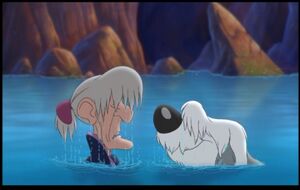 Retrieved from "https://hero.fandom.com/wiki/Max_(Disney)?oldid=1253721"
Community content is available under CC-BY-SA unless otherwise noted.