Fred
Cindy Lou Who
Donna Lou Who
The People of Whoville

Animal
Max is The Grinch's dog and the tritagonist in the computer animated Dr. Seuss' The Grinch. He is voiced by the famous actor who voiced random characters, Frank Welker.

Instead of a frightened, timid dog who reluctantly does the Grinch's bidding, Max is very much loving and loyal to the Grinch unlike his previous version. He's very different than his 1966 and 2000 version.

Max is smarter than the average canine, almost acting as the Grinch's "butler". At one point, Max does his puppy eyes in an attempt to sleep in the Grinch's bed, but The Grinch doesn't buy it. Then the Grinch's moose companion Fred does the same thing and the Grinch relents which he immediately regrets this.

He also doesn't like it when his master was being mean to Cindy Lou Who and the people of Whoville, but he knew that his master have a good heart.

Like his previous version, it's still unknown where he and The Grinch met during childhood or what. But he have been living with his master for 53 years.

Every morning, Max will wake up and serve his master with a drink of coffee whatever his master wake up or whatever he need. After telling his master that they're out of food because of The Grinch's emotional eating, they both only visit Whoville when the Grinch needs to buy food and do bad things.

While shopping, he was upset that his master was being mean to The Whos since he know that Grinch hate Christmas since 53 years and after they bump into Cindy Lou, he does like her even though The Grinch was mocking her about seeing Santa since no one never see him in person which it gave Cindy a idea later during the movie.

Days before Christmas, Max just want to have some fun by playing some drums during his master's music lesson which it upset that the Grinch and told Max to leave which it hurt his feelings.

After he was sent back to his bed, he still feel hurt until his master came and apologized to him that he was sorry and he's still a good dog, but a bad drummer. So, Max does forgave his master and they play chess while his master sneakily trick Max by giving him a squeaky ball and cheats while Max took off to get his ball.

Later on, his master soon decides that he will steal Christmas from Whoville to assuage his distress after telling Max about his plan.

His master acquires a fat reindeer whom he calls Fred to help him pull a sleigh that he stole from frenemy Mr. Bricklebaum. After a test run, the Grinch discovers that Fred has a wife and child. With a heavy heart, he lets Fred go back to them.

On Christmas Eve, after making a Santa Claus disguise and dozens of gadgets to help him with his theft, the Grinch and Max, who pulls the sleigh in Fred's place, go down to Whoville and begin stealing the decorations and presents.

His master soon encounters Cindy after falling into her trap. Her request to help lighten her mother's workload, and her kind advice about listening to the Whos' singing to take his sadness away, touches the Grinch's bitter heart. Nevertheless, the Grinch carries on with his mission.

Cindy at first believes that it was her fault because she 'caught' Santa, but Donna tells her that Christmas is more than just presents and that Cindy's the best thing that ever happened to her. The Whos join together in song.

The Grinch and Max hear the singing and the Grinch is puzzled to see that they are celebrating Christmas despite his theft. After heeding Cindy's advice and immersing himself to their singing, his small heart triples in size, causing him to double over in breathless joy and wonder.

The sleigh almost falls off Mount Crumpit and the Grinch tries to save it. In the nick of time, Fred and his family come to his aid. After securing the sleigh, the Grinch and Max go to Whoville to return the stolen items and he admits his theft to the Whos and apologizes before going back to his cave.

Feeling sorry for the Grinch, Cindy comes to invite him to celebrate Christmas at her house and he awkwardly attends along with Max.

When seated down for dinner, his master confesses that it wasn't really Christmas he disliked, but being lonely and his bitterness over being neglected. Before carving the roast beast, the Grinch offers a toast, "To kindness and love, the things we need most."

The Dog Days of Winter

This take place before the movie and Max is the main character of this story. His master, The Grinch was very sick and need some tea to get better. So, Max braves the harsh winter weather and an uncooperative Who doesn't let him in since dogs aren't allowed. Then, Max quietly sneaking in, got the tea, pay it and left the store.

After Max makes it home, he makes the tea and gives it to his master which Grinch kindly rewards him by sleeping him in bed and Max has a cold at the end. 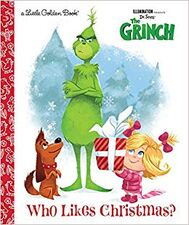 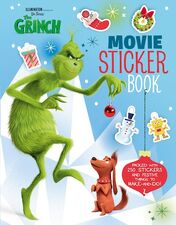 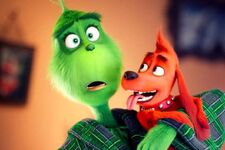 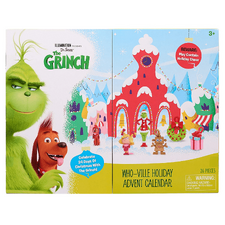 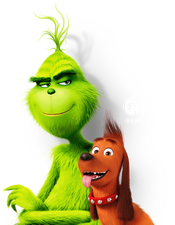 Max notice that his master was very sick

Max got the tea 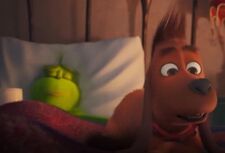 Max smiles after his master pet him

Max was surprised that Fred was making coffee

Max growls while his master was working out

Max went shopping with his master

Grinch laughs while Max licks him in the face