Playing with his toys
Making

Mischevious Rabbit
Maximilian "Max" Bunny (Birthday: December 30) is a cheerful three-year-old bunny boy with a one-track mind, who knows what he wants and won't give up until he gets it. He loves to get dirty and play with anything slimy, mucky, or sticky. He is a bundle of bunny energy. He is physically fearless, cheerful, enthusiastic, and stubborn. His will of iron is frequently a source of frustration to his big sister Ruby. He is voiced by Billy Rosemberg in Seasons 1, 2, and 3 who also voiced Jacob Two-Two.

Max doesn’t talk much or go to school yet, but that doesn’t stop him from turning the tables on Ruby and cheerfully getting his way in every episode. Max loves his sister but will never do something just because she wants him to. He frequently gets a sly look on his face when he wants to get up to mischief, as well as a resentful look when he is either prevented from doing what he wants to do or is made to do what he doesn't want to do. Max loves trucks, rockets and mud. His favorite toy is his red rubber elephant. He also enjoys really tacky candy like Slime Dribblers, Chocolate Shock Rockets, and Red-Hot Marshmallow Squirters.

Max will a lot of times want to get in Ruby's activities like sleepovers and Bunny Scout camp outs. Max is very loud especially when Ruby wants some quiet time like watching Baby H. Max is very amused with toys. He has his Red Rubber Elephant, Screaming Green Alien Gorilla, and more. He hangs out with Morris (Louise's cousin) a lot. He also likes riding around in his large red toy car. In all he gets along with Ruby in the end and they have a great time. He also has a best friend and in many episodes he knows more about grandma than Ruby does. Max is also friends with Roger. Max's birthday is five days after Christmas. 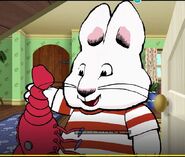 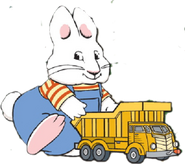