Find out what happened to Rachel Amber (succeeded),

Maxine "Max" Caulfield is the main protagonist of the 2015 episodic video game Life is Strange. After a five year absence from her hometown, Arcadia Bay, she returns to the small town in Oregon to attend a photography class and discovers she has the power to rewind time after her friend, Chloe Price, is shot and killed. Dreaming of an impending storm set to destroy Arcadia Bay, Max must discover how to with her time-travelling powers, as well as the help of her best friend, Chloe Price.

She is voiced by Hannah Telle.

Max is the quintessential hipster, preferring an understated style that consists of simple T-shirts bearing logos and "generic jeans" (as Chloe calls them). She has brown hair, blue eyes, and freckles. She appears to wear eye shadow and eye liner, although this is also quite understated. She has no tattoos or piercings that we know of. She wears a set of three colored bangles on her right wrist that appear to be silicone wristbands.

Max is a geeky, quite introverted and slightly self-conscious girl, particularly when it comes to her photography. According to herself, she rather likes to observe the world around her than actually participate in it; that's why several students including Juliet Watson think she wouldn't really care for others. But on the contrary, she makes a genuine effort to show kindness to all of Blackwell's students. She's a clear, deductive thinker, smart and sneaky, but practical, reasonable, and mature for her age, especially compared to her best friend, Chloe. She is also brave, placing herself in harm's way to protect those she cares about.

She has a great affection for photography, always taking pictures of her surroundings, since she considers it a way to "be part of the world at a safe distance", and aspires to make it a career one day. She especially has a fable for old analogue cameras and instant camera selfies. She also seems to like obscure movies and anime, much like her friend Warren Graham. She has always dreamed of travelling and exploring the world, as well as going on "adventures" together with her childhood friend Chloe.

A defining trait of Max's shown throughout the game is that she is an excellent judge of character; not only is she one of the few friends of Kate Marsh, who is regularly bullied for being religious, but she is easily able to see that Frank Bowers, drug dealing notwithstanding, isn't quite the mean person he makes himself out to be, as he rescued a group of dogs from pit-bull fighting for no reason other than it was the right thing to do, and even took in one of them as his pet. It goes both ways as she also becomes suspicious when Kate tells her about how Nathan offered to help her at a party, as she knows Nathan isn't the kind of person to help someone without an ulterior motive. Additionally, while she admires Mark Jefferson, she doesn't put him on a pedestal and acknowledges that he has flaws (e.g. she finds him rather smug and pretentious) and any respect she has for him quickly disappears upon discovering the kind of person he really is.

Max becomes more confident and decisive as her adventure continues, probably due to Chloe's influence combined with her time-altering powers. This newfound strength and self-confidence reaches its full extent in Episode 5 when she is finally confronted with Jefferson and has to save Chloe. Right from the beginning, Max feels deeply responsible for her actions and does not take her rewind power lightly, but perhaps doesn't yet realise the full consequences of her power. At the end, Max appears deeply troubled with the consequences of her decisions and the responsibility she has to bear, as represented in her nightmare.

Some people regard Max as "nosy" - as revealed in her Blackwell student file. There are several instances throughout the game where Max is called that by other characters, including admitting to being nosy herself. It's obvious that Max is pretty interested in other people's stuff, but its up to Max how far her curiosity goes, such as to what extent she goes to nose around in other people's rooms. She refers to herself as being clumsy after breaking and spilling a number of items and having to rewind time.

Maxine Caulfield was born September 21, 1995 in Arcadia Bay, Oregon. There, she spent most of her childhood and a young adulthood. As a child, Max had decided she wanted to be a photographer. Her parents indulged her dream and gave her an old Polaroid camera to play and take pictures with. As she got older, she adopted a fondness for analog cameras over digital cameras.

At some point she met a girl named Chloe Price and the two became best friends. They spent most of their time together, drawing fictionalized versions of themselves in self-made comic strips; pretending to be pirates roaming their homes and the forests of Arcadia bay, constantly searching for treasure that would lead them outside Arcadia Bay. They regarded Seattle as a "far away island" from a fable and dreamed of going there.Max shared a strong rapport with Chloe's father, William Price, who also used an instant camera to take pictures of her family. Max visited the Price Household frequently, often sleeping over and having breakfast with Chloe's family. On at least one Halloween, Chloe and Max dressed up as pirates.

In 2008, Chloe's pet cat, Bongo had been killed by a passing car. Max helped Chloe bury her cat in the Price's backyard. That same year, Max had visited the Price Household to spend the day with Chloe and William. The two were working on their comic books and helping William fix pancakes when he received a call from his wife,Joyce. He took his car to pick her so they go shopping and was later killed in car accident.

Around that time, the Max's parents decided to move the family to Seattle. Max, despite realizing she would be moving away from Chloe, was excited by the prospect of living in Seattle. The fate of their friendship was left in question when Max moved away.

Living a comfortable life in Seattle, she made new friends (Kristen and Fernando) and worked on improving her photography skills. Eventually, despite the value of Chloe's friendship, Max fell out of touch with her. When she reached the twelfth grade, she decided to to apply for a spot in Blackwell Academy, a well-to-do private school with a photography class taught by Mark Jefferson.

During the middle of the Summer, she received a letter from Blackwell Academy confirming that she was accepted into the school. Excited, the Caulfield family helped their daughter pack her belongings. They bid her farewell and remained in Seattle, while she returned to Arcadia Bay in September 2013.

Wanting to settle into her new environment at Blackwell, Max avoided the idea of contacting Chloe at all. She made friends with Warren Graham and Kate Marsh, a quiet religious girl who believed in abstinence. Though was she friendly and got along well with the teachers like Jefferson and Michelle Grant, Blackwell Academy's Principal, Ray Wells, was suspicious of her regardless.

Max Caulfield is the main protagonist in the Bonus episode of Before the Storm, which focuses on the early days of Max's friendship with Chloe. Max and Chloe went through Chloe's room cleaning up her room. As she is helping Chloe clean her room, Max finds several momentos to her friendship with Chloe.  All the while, Max was worried, as she was going to move to Seattle in three days, as her father recently got a new job there, and she still had not told Chloe yet. Max can choose whether to tell Chloe or not. Regardless of her choice, Chloe cuts her off when she finds a casette tape of a message she ans Max made years ago when they played pirates and mention an amulet and treasure.

Max finds instructions to find the treasure in a textbook, which includes a telescope. Max heads to the attic to find the amulet while Chloe goes to find the telescope. As Max searches for the amulet, she can explore Chloe's parents' room to find emails about Chloe being recently enrolled in Blackwell Academy with a scholarship and others from Blackwell's principal, Raymond Wells and Chloe's parents addressing their concerns about regarding an incident that Chloe was involved in at Blackwell. Max eventually finds the amulet and meets up with Chloe, who had found the telescope. The two then used the telescope to find the buried treasure, which turns out to be a time capsule made by Max and Chloe when they were eight years old, as well as a casette tape from William Price, Chloe's father. Later, when Max and Chloe are looking through the time capsule, Max can play a message on the answering machine from a student's mother about the incident Chloe and her daughter were involved in. Chloe reveals that the student called her a scholarship kid and made fun of her clothes, which made her so angry that she turned on a bunsen burner near her. Here, Max can also try to tell Chloe that she is moving to Seattle again after finishing looking through the time capsule, to which Chloe reveals that she was already aware of Max moving. Shortly afterwards, Joyce Price, Chloe's mother, arrives at the house in tears accompanied by a police officer and tells Chloe and Max that William was killed in a car accident, causing both Max and Chloe to break down into tears over William's death. Three days later, Max attend's William's funeral with Chloe and Max leaves with her parents after the funeral. Max looks out the back window of her parent's car with tears in her eyes to see Chloe and her mother in mourning as she and her family drive away to Seattle.

At the end of the episode, when Chloe and her mother return from the funeral and Chloe heads up to her room, it is revealed that Max left a casette tape behind for Chloe to hear. When Chloe turns on the casette to hear Max's farewell message, the content varies depending on whether or not Max told Chloe she was moving.

Life is Strange: Before the Storm

Max is a practicing photographer. Since childhood, she has practiced to perfect her skills using analog camera equipment, preferring "old school" over the much improved technology of digital cameras. She owned a prized Polaroid camera before it was broken in the altercation with Nathan Prescott. Her teacher, Mark Jefferson, often encourages her to put her skills out to the public, but her lack of confidence in her own photography often prevents her from submitting her photos for critique.

Initially unaware, Max learns during the course of the game that she has the ability to travel through time by rewinding it. The event, triggered either by the "nightmare" of the storm she experienced in class, or the death of her friend Chloe, allows Max to manipulates moments in time to work in her favor or in the aid of others if she so chooses.

When witnessing Kate Marsh's suicide, Max's desperation pushes her power to the point that time freezes completely and she can move freely. However, this ability leaves Max drained physically. Additionally, Max can use her ability to manipulate time to travel further into the past to alter the present. 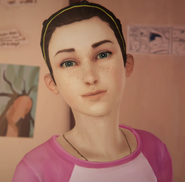 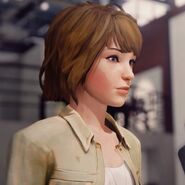 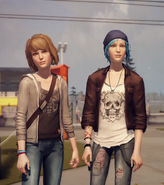 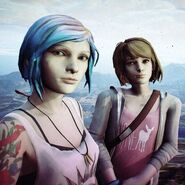 Max and Chloe when they were younger
Add a photo to this gallery
Retrieved from "https://hero.fandom.com/wiki/Max_Caulfield?oldid=1858284"
Community content is available under CC-BY-SA unless otherwise noted.