Hanging out with friends.
Arcade gaming.

Become an extended member of the party.
Destroy the Mind Flayer (both succeeded).

Maxine "Max" Mayfield is a main character introduced in the second season, and a major character in the third season of Stranger Things.

She is portrayed by Sadie Sink, who will portray Lori in The Glass Castle, and Annie Broadway. Jacey Sink played the character as a child.

Max is a tomboy, having many interests that some wouldn’t consider “conventional” for a girl during the time. She greatly enjoys skateboarding and is skilled at arcade games (such as Dig Dug), being proficient enough to achieve the top scores. She also displays a slight interest in horror films, having dressed as Michael Myers for Halloween. Max has some driving experience and was able to drive her brother's car fairly well.

Due to moving to Hawkins and her brother’s abusive treatment towards her, she was initially asocial and cautious towards other people and frequently proves to be highly acerbic and overall aloof. Her distrustful demeanor made her skeptical, and she often had a hard time believing the strange events that occurred in her new town. Nevertheless, she was willing to lend a helping hand once she accepted the gravity of the situation. While she initially brushed off Lucas and Dustin’s attempts at befriending her, she was shown to be eager to become a member of the Party, continuously enduring their harsh treatment to be included. When she was eventually accepted into the Party, she was immensely loyal toward her new friends, self-identifying as a "zoomer" as her role in the group and going so far as standing up to Billy to protect them.

In 1984, Max and her family moved from California to Hawkins, Indiana after her mother Susan remarried to Neil Hargrove. She and her stepbrother Billy were not happy about the move.

Max had beat Dustin Henderson's high score on Dig Dug at the Palace Arcade under the name "MADMAX". Later that week, Max was dropped off at Hawkins Middle School by Billy for her first day. Max was introduced to her new class by Mr. Clarke. After school, Dustin, Lucas, Mike, and Will followed and watched Max while she was skateboarding. She noticed and left a note for them that reads "Stop Spying On Me! Creeps!"

Lucas and Dustin were both interested in Max and invited her to come trick-or-treating with them without consulting Mike. When she joined them on Halloween, Mike was upset about her presence. The next day at school, Dustin included Max in the group when he showed them a new creature he had found – a pollywog-like creature Dustin had called D'Artagnan. When the boys started to discuss that the creature could be related to the Upside Down, they refused to tell Max about the events of the previous year and asked her to leave the room. D'Artagnan later escaped and Max tried to help them find the creature. She met Mike in the gym, where she confronted him about not being included in the group. Unbeknownst to her, Eleven had been watching them both and used her powers to fling Max from her skateboard out of jealousy.

When Max became tired of being excluded from the Party, Lucas met her at the arcade. He told her everything that had happened the previous year, including the Demogorgon and Eleven. Max did not believe Lucas' story. Later, Lucas arrived at her house, telling her to come with him so he could prove to her his story was true.

Max and Lucas met with Dustin and Steve Harrington at the junkyard where they were hunting for D'artagnan – who Dustin now believed was an adolescent Demogorgon. However, the group encountered more than one of the creatures and were surrounded by them until they suddenly retreated.

The four of them regrouped with everyone else and learned about the Mind Flayer that was infecting and controlling Will. While Joyce sought to free Will from the Mind Flayer's influence, and Eleven went to close the Gate at Hawkins lab, the others were left in Steve's care to keep them safe. Mike, Lucas, and Dustin wanted to head into the Upside Down-infected tunnels and start burning them to cause a distraction to help the others. Steve refused to allow it.

Max's stepbrother Billy arrived at the house, looking for Max after she had sneaked out of the house. Angry that his step-sister had been keeping secrets, he attacked Lucas and nearly beat Steve to death. Max, finally standing up for herself, used a spare sedative to subdue her stepbrother, echoing her stepfather's words and ordering Billy to leave her and her friends alone before he blacked out. Taking Billy's car, they took the unconscious Steve and drove out to the tunnels. When Steve woke up, he agreed to join them in the tunnels where they doused the tentacles and tendrils in gasoline and set them alight. By drawing away from the Demodogs from the Gate, they bought Eleven more times to seal the rift.

On December 15, Max attended the Snow Ball. As her mother helped her with her hair before leaving, Max glared at Billy, reminding him of her warning. At the dance, she and Lucas danced together and shared their first kiss. 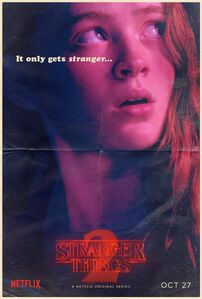 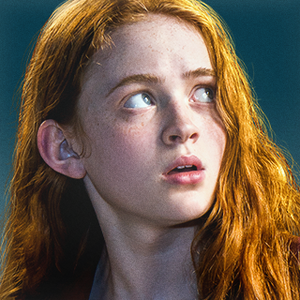 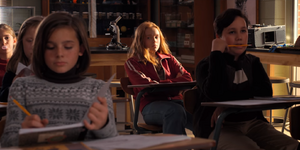 Max and Lucas in school. 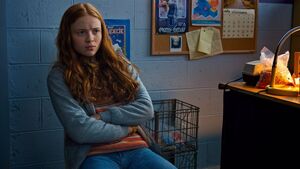 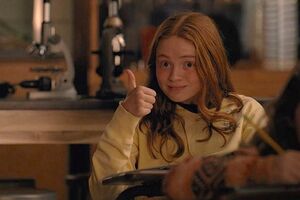 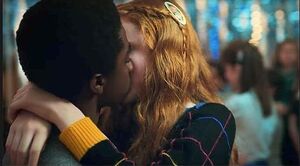 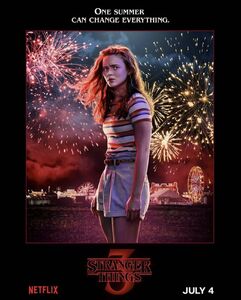 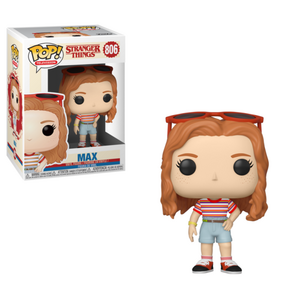 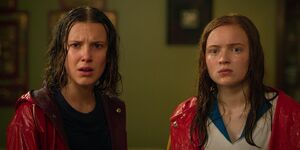 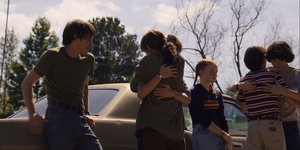 Retrieved from "https://hero.fandom.com/wiki/Max_Mayfield?oldid=1752718"
Community content is available under CC-BY-SA unless otherwise noted.