Max Payne (born May 31, 1971) is the titular character and protagonist of the Max Payne video game series. He is a former NYPD detective turned DEA agent, who becomes a seeker of vengeance for those who have wronged him.

He was voiced by James McCaffrey in the video game series, and his character model was based on Sam Lake and Timothy Gibbs. In the live action film, he was portrayed by Mark Wahlberg, who also played Bob Lee Swagger in Shooter, Cade Yeager in the Transformers film series, John Bennett in the Ted films, Chris Farraday in Contraband and Billy Taggart in Broken City.

The game begins with Max Payne coming back home. He finds a trio of criminals roaming around in his apartment. He attempts to save his wife Michelle and their newborn daughter Rose from them, but it was too late.

In response to the incident, he went undercover to wage war against the Mafia. He begins his vigilantism by engaging in a shootout with the mobsters working with Jack Lupino in the subway.

The death of his wife, daughter and close friend/partner (Alex Balder) had a severe effect on Max Payne, turning him into an alcoholic as well as a painkiller abuser. In Rockstar's Max Payne 3, Max is somewhat overweight as a result of his depression and severe drinking.

Max Payne was born in the early 1970s, and is the son of Jack Payne, a Vietnam war veteran, and Helen Payne. Jack suffered from post traumatic stress disorder, and would often abuse Helen and Max, and have numerous affairs with women. His abuse led him to become an alcoholic, and Max resented his father and even once intimidated his father with a toy revolver. Helene died around 1976, and Jack died prematurely in 1979, leaving Max an orphan, but he was mostly raised by his maternal grandfather. Max's grandfather had an important influence on him, as he would tell him mystical stories and comfort him when he was troubled.

In the late 80s and early 90s, Max joined the New York Police Academy and was the best and top young officer in his class. From taking down fry cooks to gangsters, he was quickly promoted from beat cop to detective from the New York City Police Department. At some point during his time his department, he met Alex Balder, who became his close friend and partner on the force. The two gained some media attention when busting a major drug deal, and the two remained close friends after Balder joined the Drug Enforcement Administration. The two would often play poker, and Alex would occasionally prod max to come work with him for the DEA, but Max declined.

During the mid 1990's, Max met his future Michelle, having saved her from two robbers. After a short talk with Michelle, the two began to hang out together, and started a relationship before marrying six months later. Nine months later in 1998, their daughter Rose was born, and the family lived in the suburbs of New Jersey.

On August 22, Michelle and Rose were murdered by a valkyr-pumped madmen who broke into the Payne residence, and Max returned home during the invasion. Max killed the armed intruders, but he was unable to save his family, and held his dead wife and daughter in his arms. After burying his family in the Golgotha Cemetery, Max accepted Alex's offer to join the DEA, and became determined to find the producers of the valkyr drug. 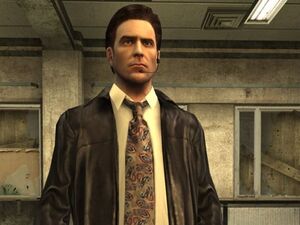 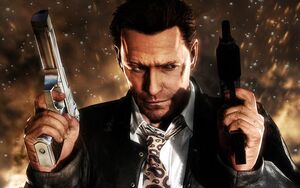 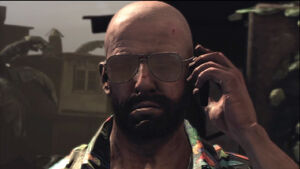 A bald Max in Brazil. 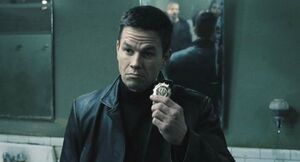 Mark Wahlberg as Max Payne in the 2008 film. 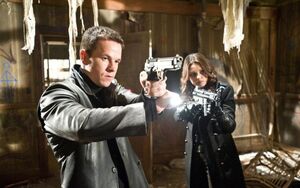 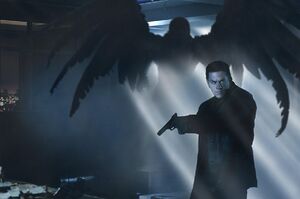 Retrieved from "https://hero.fandom.com/wiki/Max_Payne?oldid=2010740"
Community content is available under CC-BY-SA unless otherwise noted.